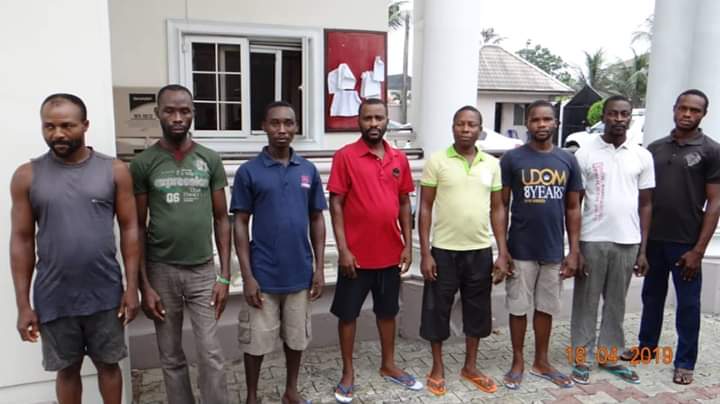 Justice Fatun Riman of the Federal High Court, sitting in Uyo, the Akwa Ibom State capital, on Wednesday, convicted and sentenced eight illegal dealers in petroleum product to six months imprisonment with N20, 000 option of fine each and a total forfeiture to the Federal Government of 150,300 litres of diesel (automotive gas oil, AGO), illegally conveyed in 501 drums.

They were first arraigned by the Commission on May 10, 2019, on three-count charge bothering on conspiracy and illegal dealing in petroleum products.

They all pleaded not guilty to the charges.

However, at the resumed hearing, on Wednesday, the convicts, following a plea-bargain agreement they reached with the Commission, changed their pleas and pleaded guilty to a one-count amended charge read to them.

The charge reads: “That you Victor Umana, Asuquo Ita Bassey, Okon Edet Solomon, Anthony Okon Effiong, Asuquo John Esuya, Victor Okon Moses, Bassey Effiong Antai and Vincient Okon Antai on or about the second day of April, 2019 at Uyo, Akwa Ibom State within the jurisdiction of this honourable court, without lawful authority and appropriate license did deal in 150, 300 litres of Automotive Gas Oil, AGO, stored in 501 drums, 300 litres, each loaded in a wooden boat and thereby committed an offence contrary to Section 4(1) of the Petroleum Act Cap P10 of the Revised Edition (Laws of the Federation of Nigeria) 2004 and punishable under Section 4(6) of the same Act.”

In view of their guilty plea, the Prosecution counsel, Adebayo Soares, urged the court to convict the offenders and order a forfeiture of the petroleum product to the Federal Government.

The Defense counsel, Wole Ayewumi, made an appeal for a light sentence for the convicts on the grounds that they are married men with no prior criminal records and did not waste the time of the court.

The convicts were arrested in April by the Nigerian Navy Forward Operating Base (FOB), Ibaka, in Mbo Local Government Area of Akwa Ibom State, and handed over to the EFCC on April 8, 2019, for further investigation and prosecution.