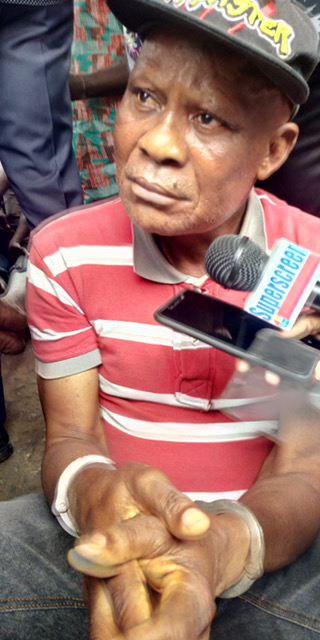 For allegedly being an impersonator of a police officer, 65-year-old Isaac Onyemechi has walked himself into police dragnet in Lagos.

The suspect who is allegedly notorious for the act in Apapa and Ikotun areas of Lagos, had been on the wanted list of the police for some months.

He met his Waterloo after he had connived with his friend who is at large to defraud a woman simply identified as Aishatu.

Onyemechi and his friend had approached Aishatu who runs an unregistered hospital on Buratai Street, Abule-Oja, Ikotun, promising to help her with the necessary certification for her hospital.

The suspect was paraded by the Lagos Commissioner of Police, CP Zubairu Muazu, at the State Criminal Investigation and Intelligence Department (SCIID), Panti, Yaba.

Making a confessional statement, Onyemechi said, “I was arrested on Monday at Ikotun. It was my friend who is a clearing and forwarding agent at Apapa, that told me that we could pose as policemen to get money from some people.

“He led me to the hospital at Ikotun. He said the hospital was operating without a license and that we could scare them pretending to be police officers and get a reasonable amount of money from them. We met the owner, Aishatu who discussed with us on how we could help her get the necessary certificates to register her hospital.

“She went in to get some money, but shortly after, a doctor who identified himself as Waheed came to meet us. He asked us what we wanted and we told him we were policemen. He suddenly became harsh and asked us to leave.

“An argument ensued in the process and the said Dr. Waheed immediately invited some touts to beat us up. My friend fled and I was left in the whole mess. Later the police arrived the scene and took me away.”

Claiming it was his first time in the act, Onyemechi said the woman who operated the unregistered hospital was yet to be invited for questioning.  “Sincerely this is my first time of doing this. It was my friend that led me into this and I know it was wrong. But also, if the woman is running a hospital without licence, I think the police should also invite her for questioning and even close down the place,” he said.