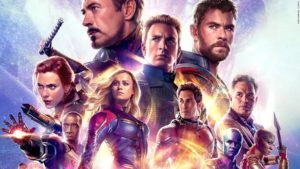 Nigerians spent over N304 million on Marvel’s ‘Avengers: Endgame’ in the films first seven days across cinemas in the country.

According to data provided by Cinema Exhibitors Association of Nigeria (CEAN) through their instagram page @ceanigeria, ‘Avengers: Endgame’ debuted with N22.5 million in Nigeria on opening day.

News Agency of Nigeria (NAN) reports that the superhero movie went on to make N188 million in its first weekend.

The Marvel’s superhero flick is still leading the Nigerian chart even as it continues to break world records.

So far, the three-hour long film has broken the record for the biggest opening in Nigeria, a title previously held by ‘Black Panther’ which made N135.4 million in its first weekend.

NAN reports that according to box office reports, ‘Avengers: Endgame’ has become the second-highest grossing film in the world, with an estimated $2.189 billion.

This record was cemented by the $619.7 million it has grossed domestically, which also eclipsed the $600.8 million ‘Titanic’ grossed in its initial theatrical run after opening in December 1997. (NAN)

2019 Presidential poll: Tribunal fixes May 15, May 16 for pre-hearing sittings