Biarritz in lockdown as G7 summit begins at French resort 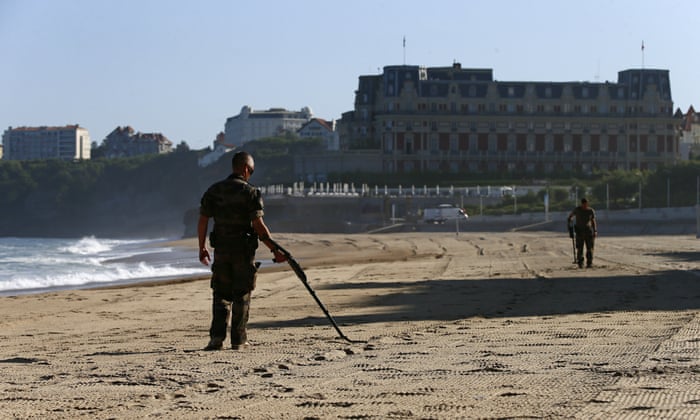 The French seaside resort of Biarritz is under lockdown by security forces ahead of the G7 Summit, with more than 13,000 police as well as a special magistrates court set up to try anyone committing offences.

The News Agency of Nigeria (NAN) reports that the historic centre of the Basque town was emptied of tourists on Friday before the arrival of leaders of the world’s advanced economies including the U.S. president, Donald Trump, and the UK prime minister, Boris Johnson, who will hold three days of talks on global issues from the climate emergency to trade wars.

Surfers were ordered out of the water on the central beach, the Grande Plage, and sent further round the coast. Sailing vessels were moved on and kept away.

The train station and airport will be closed over the weekend, creating a no-go zone in the centre.

There are road checks at the Spanish border and police have been stationed around town and on top of buildings.

Authorities have banned demonstrations, sealing off the town, but forces are on alert for any other gatherings in the region by anti-government yellow vest-protesters or possible anarchists.

“The aim is to have maximum security with a minimum of disruption. We will not tolerate any unrest. If it happens, we will respond,” said France’s interior minister, Christophe Castaner.

Riot police clashed with activists and fired tear-gas in Urrugne near the Spanish border on Friday night, on the edge of a camp where people were staying for an alternative G7 summit focusing on environmental issues.
Authorities said 17 people were arrested for an unauthorised gathering and for covering their faces. The authorities said four police were slightly injured.

A special magistrates court, with 17 prosecutors and cells that can hold up to 300 people, has been set up to deal with those arrested.

Earlier this week, five people including “black bloc” anti-capitalists were arrested for posting messages online encouraging attacks on a hotel accommodating police during the summit.

Amnesty International warned on Friday that “the hasty construction of prefab holding cells in front of the Bayonne courthouse and the arrival of numerous prosecutors and extra judges was a sign of measures that could lead to massive indiscriminate arrests and fast-track judgments”.

Some locals likened the closing down of Biarritz in peak holiday season to trying to hold an international summit at Cannes during the film festival.

Authorities have, however, argued that the international attention would bring in more tourists in the future – appealing particularly to Americans and Canadians.

An authorised demonstration by charities, climate change campaigners and other groups on the left will take place on Saturday, but 19 miles (30km) from the summit where leaders will meet at the luxury Hôtel du Palais.

Thousands of people are expected to march from the seaside town of Hendaye over the border to Irun in Spain, where another 3,000 police officers are expected to be on duty.

Several gilets jaunes groups have called for protests in France on Saturday but it is unclear where. (NAN)