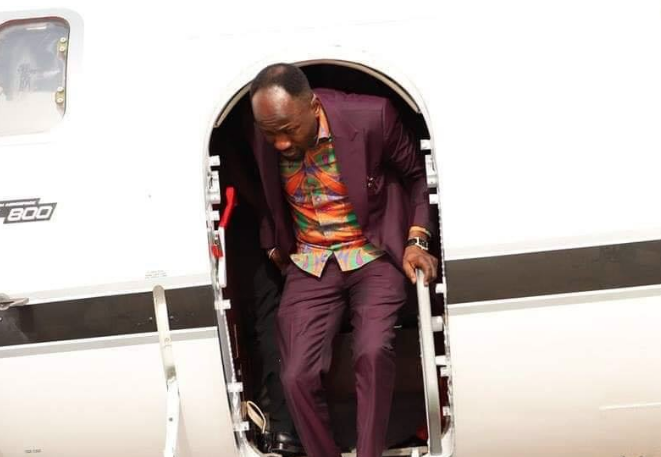 Videos and photos surfaced on the Facebook page of Omega Fire Ministry, in Dubai, on Monday, April 22, where Suleman was being congratulated following the new acquisition.

“Join us as we congratulate our father, the restoration apostle, God’s general, God’s own oracle, a dispensation of our time, the lion of Africa, Apostle Prof. Johnson Suleman on his brand new private jet for the propagation of the gospel of Christ to nations of the world with his undiluted word of power, signs, wonders, deliverance, healing and restoration and the prophetic,” the caption on the picture post read.

Following the acquisition, Suleiman now joins the likes of Enoch Adeboye, the general overseer of the Redeemed Christian Church of God; Ayo Oritsejafor, senior pastor of Word of Life Bible Church; David Oyedepo, founder of the Faith Tabernacle (Winners’ Chapel); and a host of Nigerian pastors who own private jets.

In April 2017, Stephanie Otobo, a Canada-based singer, had accused Suleman of having sexual relationship with her.

Otobo subsequently retracted the allegations against him, saying that she was “heavily paid” by powerful politicians and some pastors to blackmail Suleiman. (TheCable)