States must improve their IGR in next few years — Osinbajo 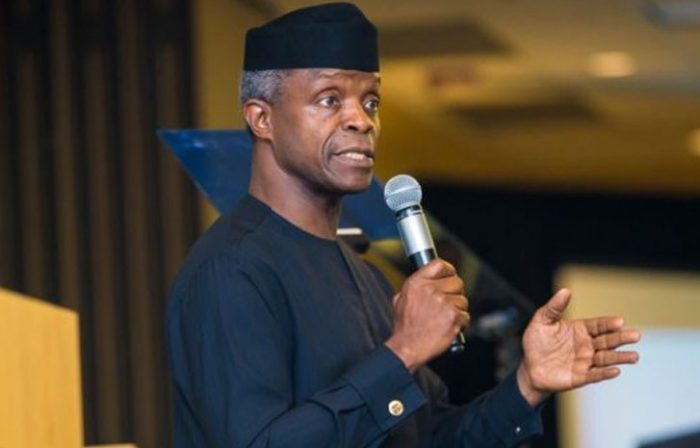 Vice President Yemi Osinbajo says there is the need for states to explore ways of improving their Internally Generated Revenue (IGR) in the next few years.

Osinbajo said this on Monday at the opening of the Induction of New and Returning Governors at the State House Banquet Hall, Abuja.

The induction was organised by the Nigeria Governors’ Forum (NGF).

According to him, it has always been the tradition for all elected officials in Nigeria to complain about inadequate funds.

“So, we will not be saying anything new if and when we raise those complaints; Lagos State, the highest IGR earner was earning 600 million in IGR when minimum wage was increased from N7,500 to N18, 000, about 140 per cent increase.

“We are confronted again with the new increase in minimum wage. So as scripture says, `there is nothing new under the sun.’ We must confront the problem, not merely by hoping that the Federal Government can do more.

“Already, our deficit is close to two trillion Naira, while debt service is somewhere in the order of 54 per cent; states must in the next few years earn more in IGR.

“We must more effectively collect VAT and increase our agricultural output, work with the Federal Government to make broadband infrastructure available all over the country.

“If a state is charging for right of way from communications companies and is hindering the laying of cables and other broadband infrastructure as an IGR measure, permit me to say that will be penny wise pound foolish.’’

He said that to tap into the millions of jobs in technology and other services that a country like India had tapped into required broadband infrastructure across the country.

On agriculture, he said that each state must leverage its most advantageous agricultural produce, by working with the Federal Government’s initiatives in agricultural credit and the recently inaugurated Green Alternative.

He said it was possible for states to generate significant revenues from agriculture.

Osinbajo assured the inductees that the Federal Government would equitably treat all states in spite of party affiliations.

“After all, all the mind boggling achievements of the regions in our history were without oil money, but mainly agriculture and taxes. Today there are even more options.

“On the part of the Federal Government, we have our work well cut out for us, but it may offer some comfort to reiterate that President Muhummadu Buhari has shown in the past four years that he would be completely transparent with the Federation account.

“Secondly, that all states will be treated fairly and equitably irrespective of party affiliations, and thirdly that the Federal Government will play its role in support of the states as often as necessary and within its means.

“We have in the past three years intervened through loans, bailouts and refunds to the tune of well over one trillion naira, representing the highest amount of Federal Government’s extra statutory allocation/intervention to states in Nigeria’s history.

“And we are proud to say that there were no discriminations along party lines in the disbursements,’’ he said.

The vice president said that in the next four years, Buhari had made it clear that his administration would be focusing attention on human capital development and infrastructure.

He said that Buhari’s administration would be working with the states on education, especially the education of girls as the administration had begun some deep diving in that respect with its Human Development Index (HDI) work at the National Economic Council (NEC).

READ ALSO:Northeast youths back endorsement of Lawan as Senate President

Osinbajo said that the administration was doing the same with healthcare.

The vice president said that the administration had already started to implement the one per cent of the Conditional Revenue Fund (CRF) in the Health Act.

In an interview with newsmen, Bala Mohammed, Governor-elect, Bauchi State, said that the inductees should see themselves as those called to duty and work toward delivering the dividends of democracy to the people.

“I listened to the development partners and what the vice president said, government is a collective responsibility. Government is a trust and we should rediscover ourselves.

“We should know that we are privileged out of 200 million, 74 of us have been elected as governors, as deputy governors, as president, as vice president, we must be able to deliver, to leave legacies and landmarks,’’ he said.

On his part, the Governor-elect of Imo State, Emeka Ihedioha, said he would look at ways of improving the IGR of the state.

He said he was looking forward to running an inclusive government that would factor in all shades of opinion. (NAN)