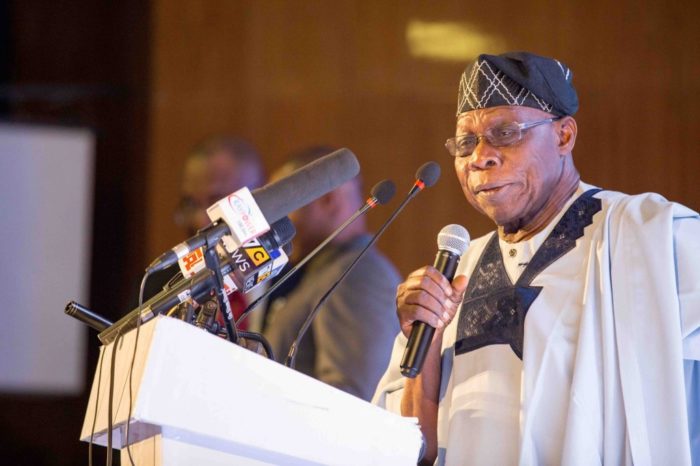 Obasanjo’s insistence that he would continue to criticise the President until ‘he begins to do the right things’ is a further confirmation of this neurosis”, the organisation said in a statement signed by its Chairman Niyi Akinsiju and Secretary Cassidy Madueke.

“It is worrisome that former President Obasanjo has always insinuated that all the past heads of state and Presidents he had criticised did not perform creditably in office.

It is amusing that the former President gave the impression that his criticism of President Buhari which began in January 2018 is borne out of a need for him to do the right thing.

Does it then mean that the President had been performing to Obasanjo’s expectations until then? If not, at what point did he realise that President Buhari had not been doing well; or did Obasanjo notice that only in January last year when he went public with the first of his open letters?

Obasanjo’s comments at the public lecture in commemoration of his 82nd birthday can also be interpreted to mean that no President aside from former President Obasanjo did the right things in office.

The pro-Buhari group added that in terms of performance, former President Obasanjo had a lot of baggage in office and is not known to be tolerant of criticism.

“It is a matter of public record that Chief Obasanjo did not entirely cover himself in glory while in office, especially with the removal and attempted removal of state governors in violation of the constitution. His methods were simply brutal and were in most cases spearheaded by the Economic and Financial Crimes Commission (EFCC) and in at least two cases, Anambra and Oyo states, led by his enforcers.

And can anyone forget so soon how Senate Presidents were impeached unceremoniously on his watch, as well as the incident that eventually led to the death of former Senate President Chuba Okadigbo soon after he was tear-gassed at a political rally in solidarity with the then candidate Muhammadu Buhari in 2003.

The previous election under Obasanjo in 2003 was hardly different. Chuba Okadigbo, the running mate of the opposition presidential candidate at the time, could not leave his house to vote for himself because soldiers had stationed an armoured tank in front of his house with the nozzle directly facing his gate. He was warned of dire consequences if he or any of his family members attempted to leave the house. That was the same election that INEC announced that the then Lagos State governor, Bola Tinubu, had been defeated by the PDP, even before the elections were conducted.”

“General Yakubu Gowon is one Head of State who has no record of public criticism of his successors in office.

The same thing applies to General Abdul-Salam Abubakar, who handed power to Obasanjo in 1999; there is not a single word of public condemnation throughout Obasanjo’s eight years in power from a man who exuded only decorum and self-respect out of office.

We hope that now that OBJ is 82, he would heed the words of wisdom of the Alake of Egbaland Oba Adedotun Gbadebo and be a true statesman, after all, eligible voters in his polling centre as well as throughout Ogun state opted to ignore his advice to massively give President Buhari a second term in office”.