Missing without trace: Whereabouts of corps member who disappeared in Lagos remain unknown 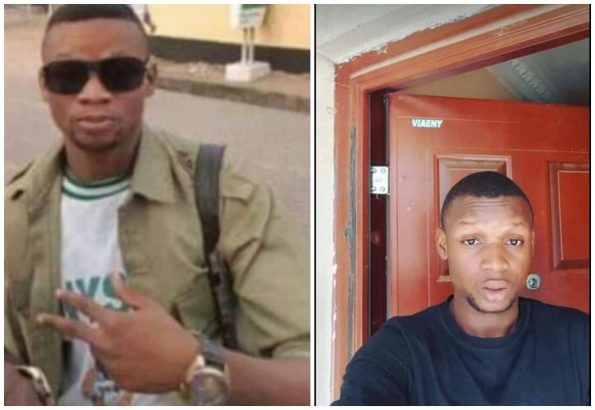 The mystery surrounding the disappearance of a youth corps member serving in Lagos State, Imam Rafiu Olalekan, is yet to be unraveled. More than a fortnight after was discovered to be missing from the apartment he shares with  a fellow corps member, his whereabouts remain unknown.

Olalekan, a Mathematics and Statistics graduate of the Federal University of Technology, Minna, Niger State hailed from Ijumu Local Government Area, Kogi State, and was posted to Lagos State for the national youth service.

His primary place of attachment is Capital Asset Limited, at CMS, Lagos with Community Development Service (CDS) at the Lagos Island Local Government.

Olalekan, after being posted to Lagos, got an accommodation through an uncle at the Myhoung Military Barracks, Yaba, Lagos. He lived there with a roommate, Matthew Shola, who saw him last on December 22, 2018.

Narrating their last moments together, Shola revealed that Olalekan was hale and hearty as at the time he (Matthew) left home for the Deeper Christian Life Bible Church camp last December 22.

“On the 21 December, I went to the camp, someone invited me. It was a five-day camping programme. The person is a pastor of the church. I left about 2pm.

But before that time, Lekan went for the CDS in the morning and came back before 12 noon. Meanwhile, before he left for the CDS he used my phone to call his friend because he said he did not have call card. When he came back he met me at home. He told me he was going to his aunt’s place at Ajah. He said he and his aunt were not on good terms and that he wanted to use the Xmas season to reconcile with her. And I told him ok.

When we were talking, the pastor came and we left for the camp. Lekan told me he would call me. Unfortunately, we could not communicate because I could not charge my phone because they steal phone in the camp and if I decided to charge my phone I would have had to sit with it at the charge point. That I couldn’t do, so, we couldn’t communicate throughout my stay in camp.

“When I came back on the December 25 about 2pm, I didn’t see Lekan but I saw one shoe outside and his two other shoes inside. The doors were left open. I thought he was somewhere around. I went relaxing, but time went on. I waited and didn’t see him. Then I became worried. I even thought he went to his aunt, as he told me before I left for the church camp.

“But I said even if he had to go, he should have gone with his phone. Although the phone was bad but he still uses it, I thought he had got another phone. But later, I discovered his SIM card was still inside and he phone. His other smart phone too was bad. For him to switch on that phone was always problematic for him so he left it and decided to buy another one. So, I thought he had bought another phone.

“His friend, Deji, whom he used my phone to call before I left for camp called me on December 27 and told me that he had been calling Olalekan’s number but the call wasn’t going through, I told Deji that I had not seen him for days now.

“I waited till the following day and when there was still no trace of him, I had to call the person who accommodated us, who has been transferred to Maiduguri.

Deji called Lekan’s mother to report that he was missing. The mother told Deji that he had told her he would be going to Ibadan to meet his aunt, but he told me he was going to Ajah so I became confused. The mother called later that Lekan was neither in Ibadan nor Ajah.”

Also speaking about the corps member’s disappearance, his uncle, Ishaq Olawale Abdulsalami, through whom he secured the accommodation in Lagos said the disappearance remained a mystery, which had left the family devastated.

Abdulsalami had made arrangement with his soldier friend at the Myhoung Barracks in Fadeyi, Yaba to assist in accommodating Lekan, as it would be convenient to commute from the barracks to his place of primary assignment.

He said the case had been reported at the Yaba Police Station and the Lagos State Chapter of the National Youth Service Corps for further action.

“I secured accommodation for through a military friend in the barracks, but unfortunately shortly before this incident happened the friend has been redeployed to Maiduguri. The other person with whom he was living in the same room said he went to a church camp and when he returned, to his dismay, he found out that Olalekan wasn’t at home. When on the 26 December, he still didn’t see him, he had to call my military friend in Maiduguri to inform him of the incident. It was the soldier that contacted me and since then we have started the search for Imam Abdulrafiu Olalekan.”

Abdulsalami disclosed that the NYSC confirmed the corps member’s disappearance and added that the family had lodged a report with the Lagos State Police Command.

“We have reported to the police and searched all general hospitals and mortuaries in the state to no avail. We also reported to the Lagos Taskforce and the Special Anti Robbery Squad in search of him,” he said.

An assistant director at the Lagos NYSC office, who declined to be identified, corroborated the report, saying they had been duly informed and that the NYSC had taken immediate action by reporting to the Lagos State Police Command.

The Human Resource Manager of Capital Asset where Olalekan was posted for his primary assignment also confirmed to The Nigerian Xpress that the whereabouts of the corps member were unknown.

The HR manager who also preferred to remain anonymous said the last time Olalekan was seen in the office was last December 21.

She said, “The last time he came to office was 21 December. He was supposed to be in the office on the 22nd, but didn’t come because he had CDS that day. We expected him back in office on the 23 but he didn’t show up. We thought he would resume on December 27 but still was absent. We have written the NYSC to inform them that he has been missing.”

Grieving father pleads: Give me body of my beheaded son for burial