...Speaks on his life, dreams for Nigerian youths 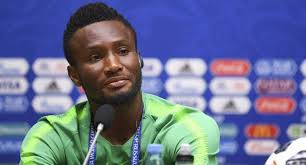 Currently captain of both his Chinese club, Tianjin Teda and Super Eagles, Mikel chats with KUNLE SOLAJA on his other activities outside the football field.

In 2005, you were at the centre of what is perhaps the fiercest struggle by two major European clubs and the obvious leaders in the Premiership to sign a young player. What were your feelings then and how did you settle?

My dad was a Manchester United supporter. He wanted me to join Sir Alex Ferguson. But Chelsea offered to sign me and three other friends who might not have gotten a club otherwise. For that reason, I decided to join Chelsea.

Venturing abroad to play professional football has become a great obsession for many youths in Nigeria. Unfortunately, most end up in wrong hands. What advice do you have for such young players hoping to break barriers in the course of going professional abroad?

Going abroad to play football, especially in Europe is not just a Nigerian mentality. It is so in many other African and South American countries. Europe offers the best in terms of facility and opportunities.

But the good thing is that the Nigerian league is also getting better with the partnership with some notable European leagues.

Next year, in partnership with some stakeholders, we are starting a programme in Nigeria to give young aspirants an opportunity to go abroad and become professional footballers.

It is called the “African Next Superstar”. We are in the process of packaging the event, which details will be unfolded after the Africa Cup of Nations’ qualifier with Seychelles.

You are a typical sports star who has life outside the sports arenas. How do you unwind after hectic matches and training schedules?

I love spending time with my family, my partner and my two daughters. I also enjoy working on my various business interests with my business team especially in the areas of manufacturing, and infrastructural development.

You may be aware that I love Nigerian music a lot. Among my favourites are Tiwa Savage, P-Square and Banky W, among others.

How and where did you meet your wife? What was the attraction?

I am a very private person and usually don’t like to discuss my family in public domain. We are fine and all is well with us.

How did you feel when you heard about your dad’s kidnap recently? Do you see it as a price he has to pay for being the father of a football star? Did that in any way affect your view of ‘home’?

I really want to put the episode behind and we have since moved on. I am very patriotic.

I love my country, Nigeria even though I have lived in Europe for many years and now living in China. I love both abroad and Nigeria. However after retirement, there is no place like home.

As a football icon known globally, it is assumed you have taste for fashion like most youths. Can you share your fashion zeal with us as most youths in Nigeria and possibly outside see you as a model they like to share passion with?

Everyone says I’m stylish. I just like wearing what looks good on me and what I feel comfortable in.

It also helps to be tall and athletic, because everything fits well. My clothes types depend on the occasion. But it’s all about quality and not quantity.

Finally, I must say that we have some amazing designers in Nigeria, with fantastic ideas.

On the field, you were once a rookie in the Super Eagles, especially in 2005/2006 when you looked up to senior players for inspiration. There is now a shift. You are the most senior player. How do you inspire the team?

I lead the team by example. To me that’s very crucial. A good leader should always lead by example, and when we are losing, I inspire my team mates by making sure they keep their heads up and believe.

However, my job as a leader in the team is easier because we have players that are hungry, focused and determined to be winners. Winners never give up. We have talented players.

Every star had a star he looked up to in his formative years. Who would you say were the stars that shaped your destiny?

As a young player, I drew so much inspiration from two of the best stars Nigeria ever produced.

I grew up looking up to (Nwankwo) Kanu and (Austin) Jay Jay Okocha. I enjoyed watching them play for their respective club sides.

More importantly, their exploits in the national team really thrilled me. In their later years, I played in the Super Eagles with them. They were highly motivating to me. But on the global stage, Zinedine Zidane was my all time hero.

The controversy is ever unending on the better player between Lionel Messi and Cristiano Ronaldo. What is your take?

There is no controversy. Lionel Messi is simply the greatest footballer to have ever played football.

Across many competitions, I have been on the same pitch with him. I, therefore, know what I am saying.

Just as the players look up to you for inspiration, so also are millions of youths outside the football field. Do you have any word for them?

My first advice is to our leaders, to please continue to create a better environment and opportunities for our youths.

And for the youths, put God first, stay focused on your dreams, work hard and be a person of good character.

Your name is the most important asset to you in life. Dreams do come true. I am an example of that. Never give up!!

Should they then be involved in politics?

In every developed nation, the youth don’t merely take the back seat in decisions affecting their countries.

They are active participants and help in shaping in their destinies. That perhaps explains why some of such countries now come out with very young leaders.

France is an example. The Nigerian youths should take more than mere ‘sidon dey look’ attitude in our national affairs. They are the future and the future begins now.

I am happy to learn that the President has signed the ‘Not-Too-Young-To-Run’ Bill. That means we are making progress. The youths who constitute the vast majority of our population must prepare to participate in lifting the country up.

Undoubtedly, you are a success in your chosen field. A captain of club and the national team. One of the very few players in the world to have featured in all FIFA men’s tournaments (U-17, U-20, U-23 Olympics, Club World Cup and FIFA World Cup). What has really inspired you for these rare feats and what words do you have for aspiring youths outside sports?

My father and mother are my greatest inspirations. Their sacrifices to our family growing up and seeing how we grew up, I was driven to never forget what we went through and how we grew up.

I am also an ambitious person. I did not give myself any other choice but to be successful because I never stop pushing myself. For the youths, follow your dreams, don’t listen to people that tell you, you cannot make it, and when things are hard, pray harder, God will give you strength to go through it. Most importantly, hard work and good name.

Do you really have investments in Nigeria? How are you preparing for life off the football pitch, considering the not-too-pleasant experiences of some of your older colleagues?

Nigeria is the biggest and fastest growing economy in Africa; there are so many great opportunities for investment and growth economically.

I have various investments in Nigeria and my team and I are looking into other parts of Africa too. I have a great business team around me and things are going well, thank God.

After China exploit, where is the next destination?

Time will tell, I am enjoying my time in China. It is a great country to live and work and I want to continue playing for another four to five years. I will like to retire back in the premier league in a few years’ time, but we will see what comes.

Let’s talk a bit of politics. Nigeria’s general elections are just months away next year. What are your expectations from Nigerian youths? What do you expect them to do?

The great thing about democracy is that everyone has a voice and everyone can contribute to changes in our country by voting.

I encourage every youth that can vote, to get their PVC and vote. To make their vote count so they can have a say in their own future. Like I said, they are the future.

We know that a sport, especially as an athlete, is not a life career. What are you going to be doing after eventually hanging your boots?

I have several business interests and I have surrounded myself with a team of good business professionals.

We are growing partnerships with manufacturers, brands and techs. I can also say that Nigeria is a place with enormous opportunities and great business leaders, from industries to banking, to oil and gas.

Do you hope to empower the youths in any way?

Yes, we have several programmes we are working on to contribute to every other efforts going on in the country by others and the government.

Our first programme launches in January and it relates to football and other programmes shall follow shortly after.

The name Mikel sounds unusual. It is being suggested that it might be an adaptation from Michael. Can you explain how the name came about?

Yes. My real name is John Michael Obi. At a tournament, it was miss-spelt and I have since been living with it without any regret.

I did not notice it in the first place because my desire to represent Nigeria at international competition was uppermost in my mind. It was in 2003 as we prepared for the FIFA U-17 in Finland.

All I did was to consult with my dad and he did not see anything wrong in my adopting the name, Mikel.

I grew up with my parents and brothers in Jos, Plateau State. Growing up was ok, but like with most families, we were struggling financially. We were not in any way different from the others in our neighbourhood.

But we are a very contented and happy family. So when I realised at the age of nine that I loved football and I was good at it, I became determined to follow my dreams.

That was how I became a footballer and got invited into the youth team from where I have since grown to be a senior player in the national team. Growing up in Jos may have also in a way helped in shaping my destiny.

You will recall that the tin-rich city also produced some of the prominent Nigerian footballers some of whom I only later heard about.

It took a while for people to realise where you are really from. Do you have any connection with your roots? How often have you visited your ancestral home?

I am very close to my family back home and I come home regularly especially when the Super Eagles have international duties at home. I am home a few times a year. Like I said earlier, I grew up in Jos even though my family and I hail from Anambra State in the East.