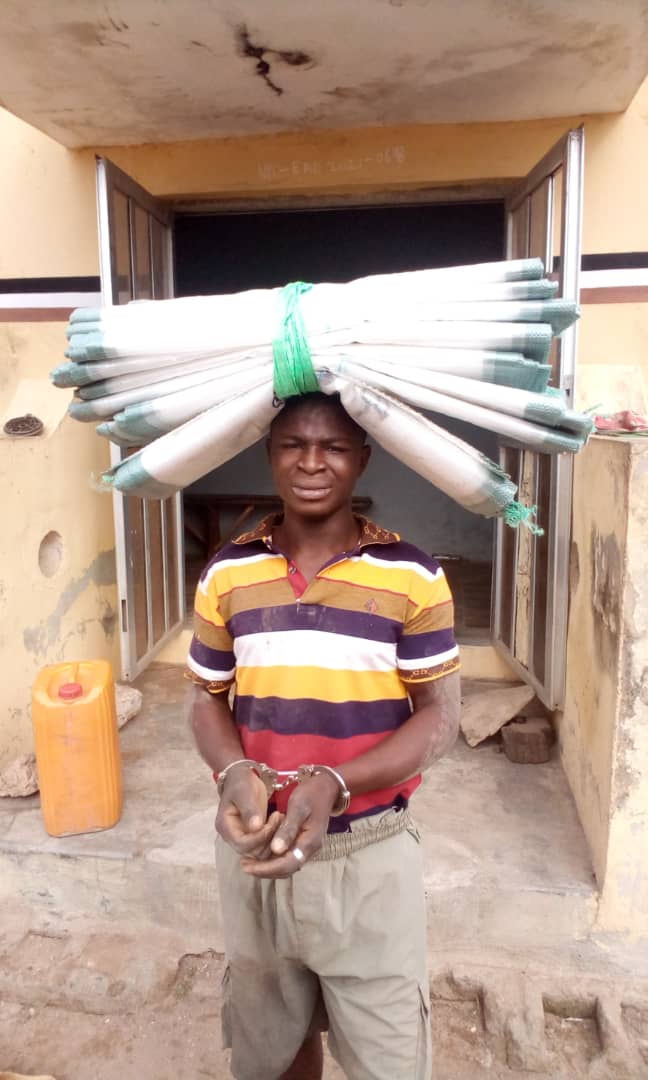 A 22-year old man in Kaiama, Kaiama Local Government Area in the northern flank of Kwara State has been sentenced to three years imprisonment for house breaking and stealing.

He was denied an option fine by the trial court presided over by Chief Magistrate Abdullahi Ahmed Boro.

He was arrested and arraigned in court by the officers of the Nigerian Security and Civil Corps (NSCDC) on the charges of house-breaking and stealing.

He was said to have broken into the house of one Mr. Jimoh Adigun at the General Hospital Road, Kaima, on July 21, 2022, where he made away with 5  bundles of empty 50kg sacks.

The jailed man, Ayuba Enupe, was arraigned based on a complaint by Adigun which prompted the NSCDC to swing into action and subsequently nabbed him while trying to dispose the stolen materials.

The Corps added that further investigations by them  revealed  that the same Ayuba was earlier involved in another house breaking offence where he stole two Android phones from one Mr. Abdulrasaq’s residence in Kuokuo area of Kaiama. 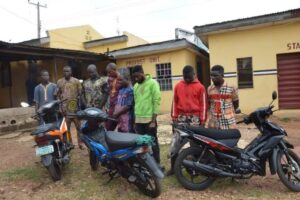 In a related development, the state’s Command of the Corps had  paraded seven suspected serial motorcycle thieves and their accomplices who were arrested at various locations in the state.

Narrating how they operate to newsmen, Wasiu Ismail, 30, said  they usually look out for houses whose tenants and owners forgot to lock their gates before going to bed, broke into their premises and  steal their properties.

Ismail was arrested by operatives of the NSCDC on July 15, 2022 for stealing three motorbikes at different locations in Ilorin, the state capital and Oro in Irepodun Local Government with the other six accomplices.

Insecurity: Security agencies must do more to stop terrorists…

The suspect said he regained freedom from prison on July 2, 2022 after serving a year and half imprisonment for plasma TV theft only to be caught stealing again.

He had said, “We stole two of the motorbikes in Oro at about 2 o’ clock in the night after we had discovered that the gate to the compound was opened.

“We also used the same methods in most of our other operations in Ilorin and work with other groups to feed us with information”.

The ex-convict, who said he is a painter, said a member of the gang; Ogunbiyi Johnson ‘Biggy’ who is from Osogbo, Osun State is the one who sources for buyers. He further disclosed that motorcycles were often sold for N130,000 each.

Ogunbiyi also disclosed that he was confessed that he was a furniture maker along Ibrahim Taiwo road in Ilorin adding that he only took the suspects to sell the machines at Ogbomoso most of the time.

Others who also spoke were Lukman Rasheed, 42, who said he was also contacted to get buyers for the stolen machines who happened to be some students who were arrested by the Economic and  Financial Crimes Commission (EFCC) looking for money to bail themselves.

The machines, he said were however sold for N330,000 each as against the N130,000 Biggy presented to the suspects.

Ayeni said three new motorcycles were recovered from the suspects disclosing that the command had in recent time been inundated with complaints of motorcycle thefts in Kwara.

He disclosed further that; “in some cases, the owners of the motorcycles were killed and in some other instances, they were taken away forcefully from the owners”.

Acting Commandant of the Corps, DCC Jonah Gabriel, appeals to Kwarans to be vigilant and report any suspicious movements in their domains.

He gave the assurance that Nigerians that the Corps would not compromise in her duties to protect lives and properties of the people and requested for more cooperation and supports towards achieving a crime free state.

Insecurity: Security agencies must do more to stop terrorists – Senate…