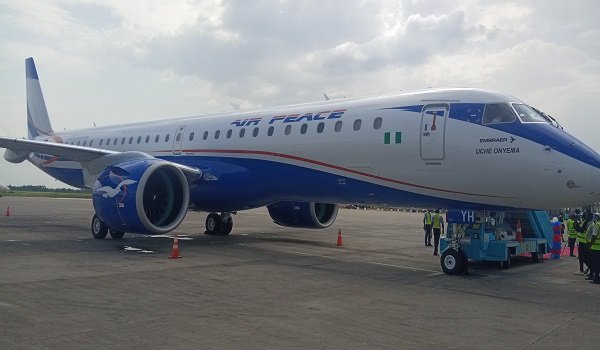 With this delivery, the airline said it would have before the end of 2022 brought in the 13 Embraer 195 E2 aircraft it placed firm orders for from the Brazilian plane manufacturer.

Besides the 13 aircraft, the carrier said it would before the end of 2023, activate payment for another 10 brand new Embraer jets out of the 17 it placed purchase rights for.

Speaking at a ceremony at the Abuja Airport, Chairman and Chief Executive Officer, Air Peace, Allen Onyema, said bringing in new aircraft would lower operating costs for the airline because of lower fuel.

He added that it would also enhance the efficiency of the fleet to connect to its routes as well as improve customer comfort.

According to him, the purchase of brand new aircraft by the carrier will alter the narrative about the safety of airplanes flown in Nigeria with the economic benefits , consideration for the environment as well as ambience of the cabin.

Describing the feat as unusual for Nigerian carriers, Onyema said operators were increasingly realising the need to have brand new aircraft in their fleet which is gaining traction among indigenous carriers.

He commended the Federal Government for creating a conducive atmosphere for operators to latch on the use of brand new airplanes, which is not only appropriate for the market size, but would boost profitability for indigenous carriers which are bogged down by costs associated with maintenance of older airplanes.

“For our aircraft, we have paid for 13 and we now have three with the arrival of the latest aircraft. There will be two coming in August to make it five and before the end of 2021 we will have eight,” Onyema said.

He outlined that these aircraft would hit the West Coast and African region as the airline will strengthen its foray into  Douala, Cameroon; Kinshasa, Congo; Naimey, Niger; Dakar, Senegal as well as Freetown, in Sierra Leone.

Onyema had in 2019, announced the acquisition of 30 Embraer 195-E2 aircraft, which included 13 firm orders and 17 purchase right orders from Embraer Aircraft Company.

According to him, the acquisition of the 30 brand new airplanes would further create additional 17, 000 jobs for technical personnel in the country, while it presently has 3,000  workforce.

“We have new routes that we want to deploy the aircraft to. We have new routes that we have just opened and more routes will still come in the coming months. We are opening Gombe very soon and our intention is to open up this country. We will also connect North East with North West and other routes. Owerri-Kaduna and other routes will be connected.

“We have been designated to so many destinations by the government. We have over 20 destinations, which is very commendable,” Onyema said.

He said that the airline was planning to commence Lagos-London route, stressing that the Nigerian Civil Aviation Authority (NCAA) is assisting the airline to fast-track the process.

Onyema specifically lauded Sen. Hadi Sirika, the Minister of Aviation for driving the change in the sector, stressing that the minister had ensured deep changes in the industry since his appointment about six years ago.

Director General of the Nigerian civil Aviation Authority (NCAA), Captain Musa Nuhu, who described the arrival of the brand new aircraft as a ‘milestone’ said that what was happening in Nigeria’s air transport industry was a paradigm shift.

He commended the Air Peace chairman stressing that the beauty of the delivery was not just that the aircraft is new but that it airline picked the right aircraft suitable for the market.

“Air Peace is not only buying aircraft but buying the right size aircraft for the Nigerian market.

“The Embraer aircraft is the right aircraft, it breaks even with low passenger figures, you maintenance cost is low, your operational cost is low.

“Another factor is that the new aircraft is absolutely great for the environment, it does less pollution.

“I am really proud that I am DG when this paradigm shift is happening. We are all here to work together to grow the industry and we have to give kudos to the entrepreneur as without such people all this will not be possible,” Nuhu said.