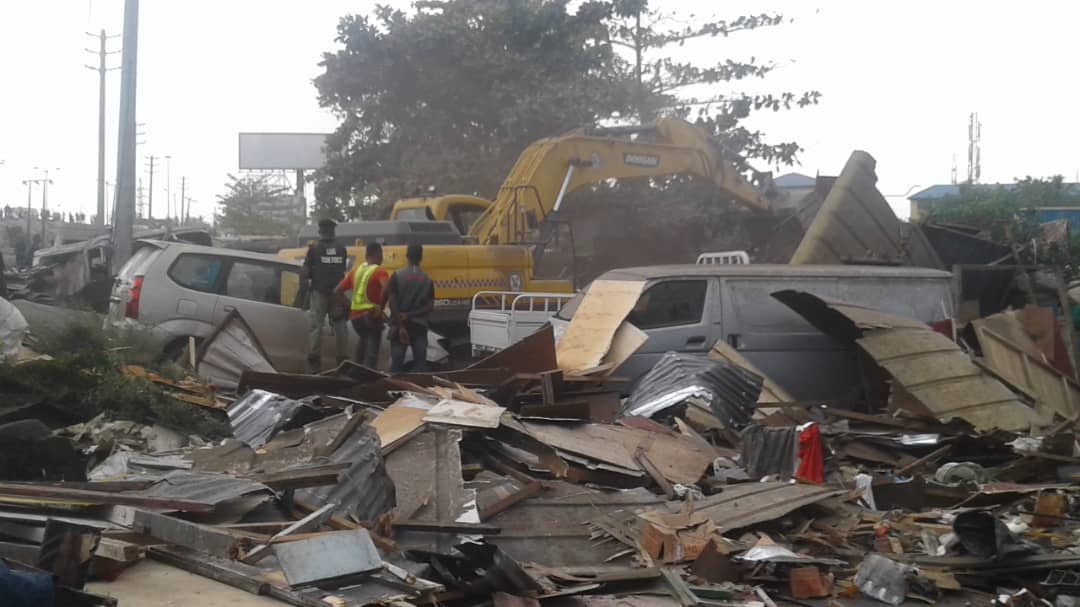 The Lagos State Environmental and Special Offences  (enforcement) unit (Taskforce), on Monday, began the demolition of over 100 illegal structures comprising of shanties, mechanic workshops, containarised kiosks and commercial bus garages around Government Public Schools at Mile 2, Badagry Expressway, Lagos.
Chairman of the Agency, CSP Olayinka Egbeyemi, who led the taskforce team on the demolition, said the enforcement exercise, which was an over – night operation followed a seven – day removal notice, issued to the illegal occupants in the area.
CSP Egbeyemi stated that the removal exercise was sequel to numerous complaints and petitions by residents, particularly the management of the Public Schools (Imoye High School and Amuwo Odofin Junior Secondary School), alleging that criminal elements have turned the area into hideouts and spots for carrying out their nefarious activities thereby making the environment unpleasant for living or learning.

READ ALSO:http://Member of Iranian council advising supreme leader Khamenei dies from coronavirus
The Chairman said the agency swung into action upon the expiration of the removal notice in order to ensure the prompt clean-up of the environment as well as clampdown on the activities of criminally minded persons that have become a source of disturbance to law abiding Lagosians, especially residents of the area.

According to him: ” These removed illegal structures, shanties were identified for harbouring criminal elements who rob unsuspecting members of the public of their valuables and also serve as an outlet for the sales of illegal hard drugs like Tramadol, Codeine, Skunk, Weed including mixed liquor to miscreants.

” Lagos is the most populous state in Nigeria as well as its economic heartbeat. As such, the zero tolerance for all forms of crimes and criminality by the present administration would be sustained.
“ Owners and Occupiers of these illegal business structures like mechanic workshops, food and fruits vendors and others have turned the entire area into an eye-sore as everywhere including the surroundings of the public schools, are usually littered with refuse, used tyres, metals and abandoned vehicles and trucks amongst others. ”
While imploring those whose illegal structures and shanties are around public schools across the State, and are yet to be demolished,  to immediately remove them before the exercise reach their various areas, Egbeyemi said anyone caught would be seriously dealt with in accordance with the law.
He, however, confirmed that the agency has commenced verification exercise of the claim of those affected but with legal documentation for the payment of monetary compensation as approved by the Lagos State Governor, Mr.  Babajide Sanwo-Olu.