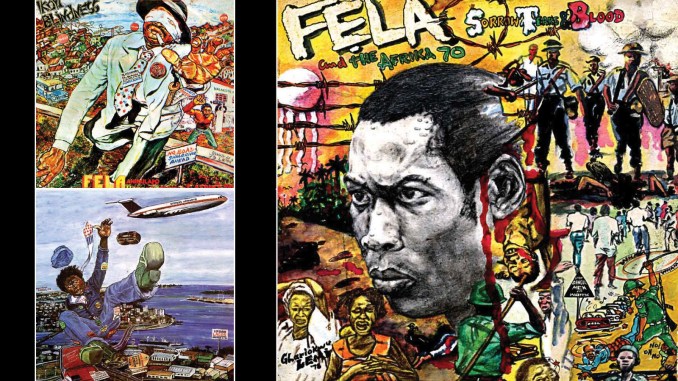 A veteran artist, Lemi Ghariokwu, has condemned the lyrical contents of most Nigerian music which he says are very evasive of the realities in our society.

He told the News Agency of Nigeria (NAN) on Monday in Lagos that poor and shallow lyrical contents were the banes of contemporary Nigerian music.

Ghariokwu, a graphic designer, designed  29 out of 56 covers of the musical albums produced by Fela Anikulapo.

He said, “Arts; be it music, creative, visual, performing arts, theatre, among others are supposed to play a role in shaping any society philosophically.

“Folarin Falana, popularly known as “Falz’’ has rich lyrical contents of happenings in the society. His songs are addressing issues affecting the society.’’

Ghariokwu, however,  said that the lyrical contents of most Nigeria’s music were about materialism, bum bum, money, buy big house and cars.

“Some musicians only plan is how they will credit the bank accounts of their girl friends with huge sums of money.

“It is a very bad moral standard when we are talking about fighting corruption in the society.

“ Some of Fela’s records were waxed over 30 years ago and they are still relevant and evergreen till date because they were philosophical and rich in contents.

“Most records being produced by most of our budding artists may not be evergreen in about 30 years time,’’ he said.He wondered whether grandchildren of musicians seeing their grandfathers leading reckless lives would agree that the country was only a bed of thorns without roses.

“They are borrowing other cultures: Americans to be precise, especially, African Americans.

“We Africans have to be proud and promote our cultures, our colonial masters don’t want us to liberate ourselves mentally.

“If a president of a country and some other important personalities from other countries could visit the Afrikan Shrine, it means Fela did something good.

He reminded Africans that they should develop and promote their cultures saying nobody would help them to do that.

He stressed the need for the up-and-coming ones to face realities, play genuine music based on happenings in the larger society.

The graphic artist said that some musicians were surviving from the fantasy music they played.

“They are not helping the society. At the end of the day, they will make the leaders to be ignorant of what the society is facing,’’ he said.

Ghariokwu said that he was happy with the trend of events because people had cultivated the habit of listening to the genre of music that Fela started during his life time. (NAN)

Factors that influence your spending habits