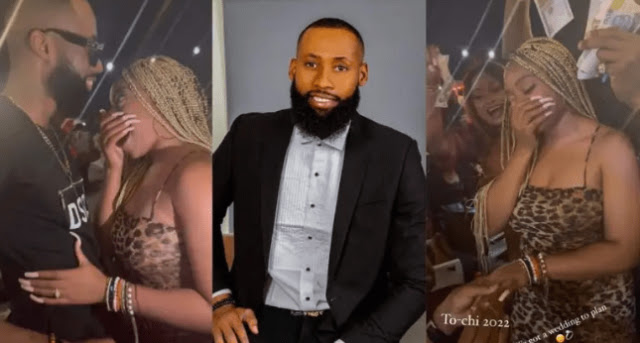 A former Big Brother Naija Lockdown housemate, Tochi Okechukwu, has deleted his engagement video from his Instagram page as his girlfriend, Chioma, shared a cryptic message on her Instagram story.

The reality TV star had on Sunday night, shared a video of his proposal, where he went on one knee to pop the question in the midst of attendees at an event.

In the video, Chioma, who is also a dancer, was visibly overwhelmed by Tochi’s proposal.

He captioned the now-deleted video, “To-chi 2022 loaded @beautiifulchii Let’s go on this journey forever! Ladies and Gentlemen, we have a wedding to plan.”

Since the proposal, Chioma had not shared the video on her page, nor has she mentioned anything on the supposed engagement.

On Tuesday, however, she shared a post on her Instagram story that read, “There’s so much more to life than the attention/validation that you seek so much for from the outside world. But it’s not me that’s gonna be used to trend. Everybody rest in Jesus’ name.”

Following the message, it was noticed that Tochi had deleted the engagement video from his page.

Ezekwesili bashes Tinubu, says ‘Turn by turn governance over, money will fail in…