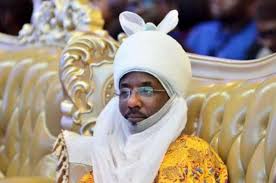 The Socio-Economic Rights and Accountability Project (SERAP) has sent an urgent complaint to the United Nations (UN) Working Group on Arbitrary Detention over what it said, was the “arbitrary detention and degrading treatment” of deposed Emir of Kano, Muhammadu Sanusi (II) also known as Sanusi Lamido Sanusi (SLS).

The SERAP said in its complaint, that “The arrest and continued detention of Emir Sanusi Lamido Sanusi is an egregious violation of his human rights. The Nigerian and Kano State authorities have violated the following rights under the Nigerian Constitution, 1999 (as amended) and international law in continuing to detain Emir Sanusi: the right to be free from arbitrary detention; the right to freedom of movement; and the right to due process of law.”

The organization said, “The detention of Emir Sanusi constitutes an arbitrary deprivation of his liberty because it does not have any legal justification. The detention also does not meet minimum international standards of due process.”

The organisation then called on the UN Working Group to “initiate a procedure involving the investigation of Emir Sanusi’s case, and urgently send an allegation letter to the Nigerian and Kano State authorities inquiring about the case generally, and specifically about the legal basis for his arrest, detention, and degrading treatment, each of which is in violation of international law.”

According to SERAP, “We urge the Working Group to request the Nigerian and Kano State authorities to investigate and hold accountable all persons responsible for the unlawful arrest continued detention and degrading treatment of Emir Sanusi.”

The organisation is further urging the Working Group “to request the Nigerian and Kano State authorities to award Emir Sanusi adequate compensation for the violations he has endured as a result of his unlawful arrest, arbitrary detention, and degrading treatment.”

“A detention is arbitrary when it is clearly impossible to invoke any legal basis justifying the deprivation of liberty. Article 9(1) of the International Covenant on Civil and Political Rights, which confirms the right to liberty and freedom from arbitrary detention guarantees that no one shall be deprived of his liberty except on such grounds and in accordance with such procedure as are established by law,” SERAP said.

The complaint was addressed to Mr. José Guevara Bermúdez Chairman/Rapporteur of the Working Group.