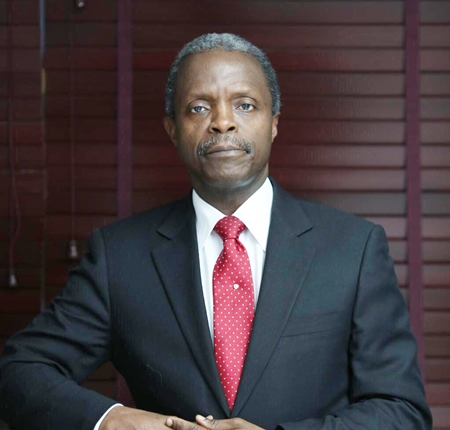 Vice-President Yemi Osinbajo says one of the objectives of  the Federal Government transformation of the oil sector is to stimulate gas revolution and enhance the economy through the utilisation of resources.

Osinbajo stated this on Thursday in Abuja when he inaugurated a Liquefied Petroleum Gas (LPG) plant for the Nigerian Army at the Mambila Barracks.

The vice-president, represented by Mrs Aisha Abubakar, the Minister of Women Affairs, noted that LPG consumption in the country was low compared to neighbouring West African countries.

The vice-president, however, said “the Ministry of Petroleum Resources Strategic Domestic LPG Implementation Plan is aimed at primarily increasing Nigeria’s LPG per capita consumption to be, at least, at par with those of neighbouring West African countries.

“In addition to enhancing our domestic per capita consumption, the plan is in accordance with Goal 7 of the UN Sustainable Development Goals which seeks to promote clean energy.’’

Osinbajo commended the army for the initiative, saying that he looked forward to seeing similar plants established in army barracks and cantonments nationwide.

“I have also been briefed that the establishment of the LPG plant in army barracks is in line with chief of army staff’s barracks investment initiative programme aimed at creating jobs for widows of deceased personnel.

“I want to, therefore, appreciate the leadership of the Nigerian Army, the chief of army staff, in particular for this initiative and to urge other services to key into the domestic LPG penetration plan.’’

Earlier, the Chief of Army Staff,  Lt.-Gen. Tukur Buratai, said the army set up the plant in partnership with Gasland LPG, an indigenous company.

Buratai said that the initiative was premised on the huge LPG market available in barracks spread across the country.

“It is was envisaged that the construction and operation of these LPG plants will in addition to curtailing the usage of kerosene stoves and fire woods in our barracks,  and create jobs for the teeming youths in the barracks.

“The Mambila Barracks LPG is the first in a series of gas plants to be constructed under the partnership in the six geo-political zones.’’

He said that others would follow in due course.

According to him, 10 LPG micro distribution centres have been established in selected locations within Nigerian Army barracks in Abuja as a pilot scheme for their introduction into all our barracks nationwide.

He said with the establishment of plants, roadside vendors would be replaced by micro distribution centres to be owned and operated by retired/serving personnel desirous of investing in the project. (NAN)