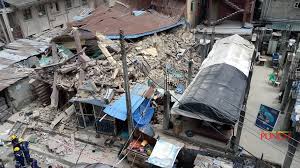 The Anambra State Government, on Thursday, sealed up the premises of the four-storey building which collapsed, on Wednesday, and trapped seven persons, including the engineer handling the building project.

The sealing came shortly after the remaining two trapped victims were found dead yesterday afternoon, in addition to two others were found dead during the rescue operation on the fateful Wednesday

According to an eyewitness, men of the Urban Planning Department of the state government had arrived the scene on a black Hilux van and sealed the collapsed building round with red ribbon

Some of the victims rescued alive are now receiving medical attention in various hospitals in Onitsha, including Onitsha General Hospital and All Hallows’ Hospital, Onitsha.

Katchy noted that the search and rescue team would continue until they get to the foundation of the building to ensure that no person would be left whether alive or dead.

Chairman of Onitsha North Local government council, Mr. Patrick Agha Mba, who was at the scene, commended the youths who came out en masse immediately the building came down for rescue operation that ensured that three persons were earlier rescued alive before the excavator arrived.

Agha Mba also commended Governor Willie Obiano for his prompt intervention by sending excavators for rescue operation, saying that without quick intervention all those trapped would have died under the debris.

He disclosed that government would look into the cause of the collapsed building but noted the priority now should be on how to bring out those trapped and treat those injured.

NANS tender apology to Nigerians over protest against APC leadership