Mother of three jumps into river, blames action on poverty 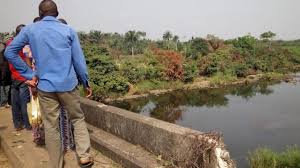 A mother of three, who identified herself as Kafayat Alake, attempted to commit suicide by jumping into Osun River from Gbodofon bridge in Osun State, blaming her action on financial frustration.

Kafayat, who claimed to have separated from her husband 13 years ago, said she has three children.

She said her resolve to commit suicide was because she does not have food to eat and feed her children and became frustrated due to her financial predicament.

“My husband resides in Lagos. We separated about thirteen years ago. Things are very hard for me since then.

“I have three children and I couldn’t cater for them due to my financial predicament.”

It was gathered that the incident occurred at the time that roads were empty due to the lockdown imposed by the state government as part of measures to prevent the further spread of Coronavirus in the state.

She was sighted while loitering around the bridge and eventually jumped into the river.

Some residents of the area then raised the alarm which drew the attention of a man simply identified as David Johnson who dived into the river and brought her out alive.

Officials of the Osun State Fire Service were subsequently called to the scene and took her to hospital.

According to the PPRO, “It was an attempted suicide. She jumped into Osun river. She was rescued and taken to the hospital for treatment. She is suspected to be of unsound mind.”