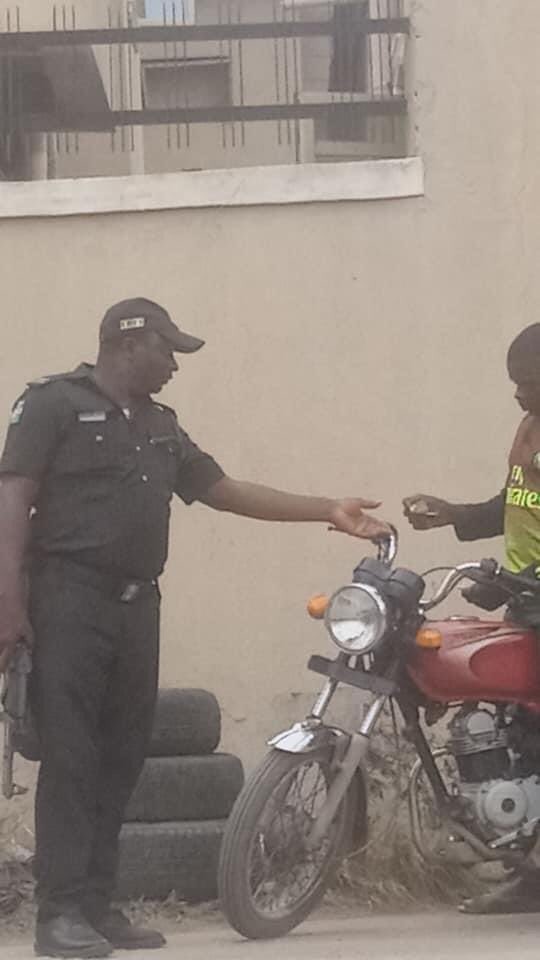 An Inspector of Police, Joseph Dike, has been arrested and subjected to orderly room trail for allegedly extorting a commercial motorcyclist in the Pako Aguda area of Lagos State.

It was gathered that the Inspector, attached to the Aguda Police Division, was on routine stop and search with other policemen on September 22,  when he perpetrated  the illegal act.

A concerned member of the public captured the moment the policeman forcefully collected money from the reluctant cyclist, and shared same on various social media platforms.

In a statement, on Thursday, the Lagos State Police Public Relations Officer (PPRO), Mr. Olumuyiwa Adejobi, said the Commissioner of Police had on sighting the picture, called for disciplinary action.

Adejobi said, “The CP has again exhibited his zero tolerance for corruption, when he ordered for the immediate orderly room trial of Inspector Joseph Dike attached to Aguda Division of Lagos State.

“The police chief was piqued by the manner in which the inspector was caught in a widely circulated  picture extorting a motorcyclist at Pako Pin-Down Point, Aguda, Lagos State, where he was posted on Stop and Search duty.”

The PPRO said the CP also warned all personnel in the state to desist from all forms of illegality, as none will be spared if found culpable.

“In the same vein, the Commissioner of Police has also ordered the Police Public Relations Officer, Lagos State Command to circulate a strong-worded signal warning all police personnel in the command to desist from corrupt practices, extortion, misuse of power, improper dressing.

“Harassment to members of the public by using sticks or horse whip, violation of human rights and drunkenness on duty, as such will attract severe reprimand or punishment according to the provisions of the Police Act and Regulations  and other extant laws of Nigeria.

“The Commissioner of Police, in addition, warned senior police officers of the command to caution their men and ensure that his directives with a view to stopping these unprofessional and unethical conducts are strictly complied with,” Adejobi said.

The Lagos Police Spokesperson further stated that Odumosu assured the general public of his determination to have a people-oriented policing system in Lagos State.

Sanwo-Olu tasks youths, women to be employers of labour