When, in 2017, graduands of the 2016/2017 set of the famous Lincoln University filed out to receive their degrees, in faraway United States of America, the valedictorian and best graduating student, was a certain Victor Perewari Pere, a Bayelsan and Dickson scholar.

Pere, who dusted the pack from his field of Mathematics and Computer Science, was one of the thousands of beneficiaries of the aggressive scholarship programme of Governor Henry Seriake Dickson’s Restoration Government in Bayelsa. 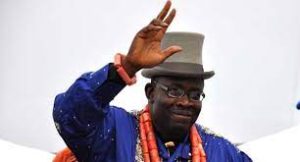 It was a policy that not only made primary and secondary education free and compulsory, but also insisted on mandatory boarding. In a state that hitherto had no boarding schools, Dickson established 13 model boarding schools, including the peerless Ijaw National Academy that drew enrolment from Ijaws in no fewer than four other states.

Dickson would follow up with the establishment of a plethora of tertiary institutions, upgrading facilities in existing schools, and even setting up a dedicated fund for education.

And those are just a tip of the iceberg of what this proud son of Toru-Orua has squeezed into some two score and sixteen odd years, as he turns 56 today, January 28th.

His people celebrate him as Ofurumapepe – the Great White Shark that dominates its environment.

But if Henry Seriake Dickson is a Shark in the waters, he is an elephant on land; imposing, strong, tough, rugged, magnanimous, intelligent, never forgetting a favour, slow to anger, and decisive in action.

Like the elephant too, which could mean different things to as many people, depending on the part of the body one touches, one could almost write a whole book on whatever aspect of the Dickson phenomenon one picks interest in.

Put simply, Henry Seriake Dickson belongs to an elite club of Nigerian politicians and public officers who have traversed the Judiciary, Legislature and Executive arms of government, and left an enduring legacy in each of them.

He has been attorney-general, member of the House of Representatives, Governor and now, Senator.

And to crown it all, he is also a grounded political gladiator, with a strong grip of, and total acceptance in, his political base. That base has since transcended Bayelsa West to the entire South South zone, the Ijaw nation and, I dare say, the Nigerian political landscape.

Dickson it was, who planted a near-alien political party (the Alliance for Democracy, AD) in a Bayelsa (nay South South zone) that was either PDP or APP.

Yes, as the pioneer state chairman of the AD, at the outset of the current democratic dispensation, Dickson delivered his constituency – a Senator, a member of the House of Representatives and a handful of other State assembly members to AD. He has basically remained his own godfather.

As governor, while his colleagues in other states were busy devising ways to cage their state Judiciary, Dickson was the one who actually sponsored the financial autonomy law in the Bayelsa State House of Assembly. It was one of the over 50 bills he sent to the assembly. The Thanksgiving law and the financial transparency law also came from him.

The legislative activism was merely a continuation of the crusade he began during his days at the House of Representatives. There, he either sponsored or co-sponsored, among many other bills, the EFCC Bill, the ICPC Bill, the FOI Bill, the Evidence bill, which culminated in the current Evidence Act, the Party Internal democracy bill, electoral reform bills, the prevention of terrorism bill,  as well as the kidnapping and hostage taking bill.

One would suspect that, of the three arms of government, Dickson has served in, he seems to have a silent bias for lawmaking – which explains why he was nearly pained at living the National Assembly in 2012 to go serve Bayelsa as governor. But he expressed a wish to return to the National Assembly someday. That wish came to fruition in December 2020 by-election, when he was overwhemingly elected Senator to represent Bayelsa West at 9th Senate.

Incidentally, his two terms as governor (the first in Bayelsa’s history) unleashed another positive side of Dickson. He went bullish with Education, Health, infrastructure development, civil service reform, security, economy, the environment, women development as well as cultural and value revival.

But Dickson has always insisted that politiking should never be at the expense of development, whether of Bayelsa or Nigeria. For, according to him, the advancement of society should transcend partisan politics. Understandably, therefore, when, at the onset of the President Muhammadu Buhari Administration, Chief Timiprey Silva, Dickson’s well known political adversary, was nominated for ministerial appointment, HSD, as the sitting governor in his Bayelsa home state, was among the first to congratulate Sylva. He did not stop at that: he mobilised the senators from Bayelsa, who were all of the PDP, to pull all the stops to ensure Sylva, himself a former governor of the state, scaled through the senate screening.

And now that he is back to the National Assembly and the business of lawmaking, Dickson has not hidden his bias for Judiciary,  electoral and constitutional reforms, women and gender issues, the environment, Niger Delta, security, terrorism, and a whole gamut of legislations to help engender national unity.

He also makes it his duty to ensure that no Bayelsan, irrespective of political affiliations, is unjustly treated or maligned at the national assembly – especially those in strategic federal appointments.

Outside of all these, he remains a party man, standing out as one of the few voices of reason, and a rallying point, of the Peoples Democratic Party (PDP).

He remains outspoken, strategic and deliberate in his actions and contributions to national debate. Of course that has earned him a few ‘enemies’, but then, nobody goes war ruling out a few stray bullets.

So, the PDP continues its search for formidable candidates to lead it into the 2023 presidential battle, it might not be such a bad idea to look in the direction of Seriake Dickson, depending on where the zoning pendulum swings to.