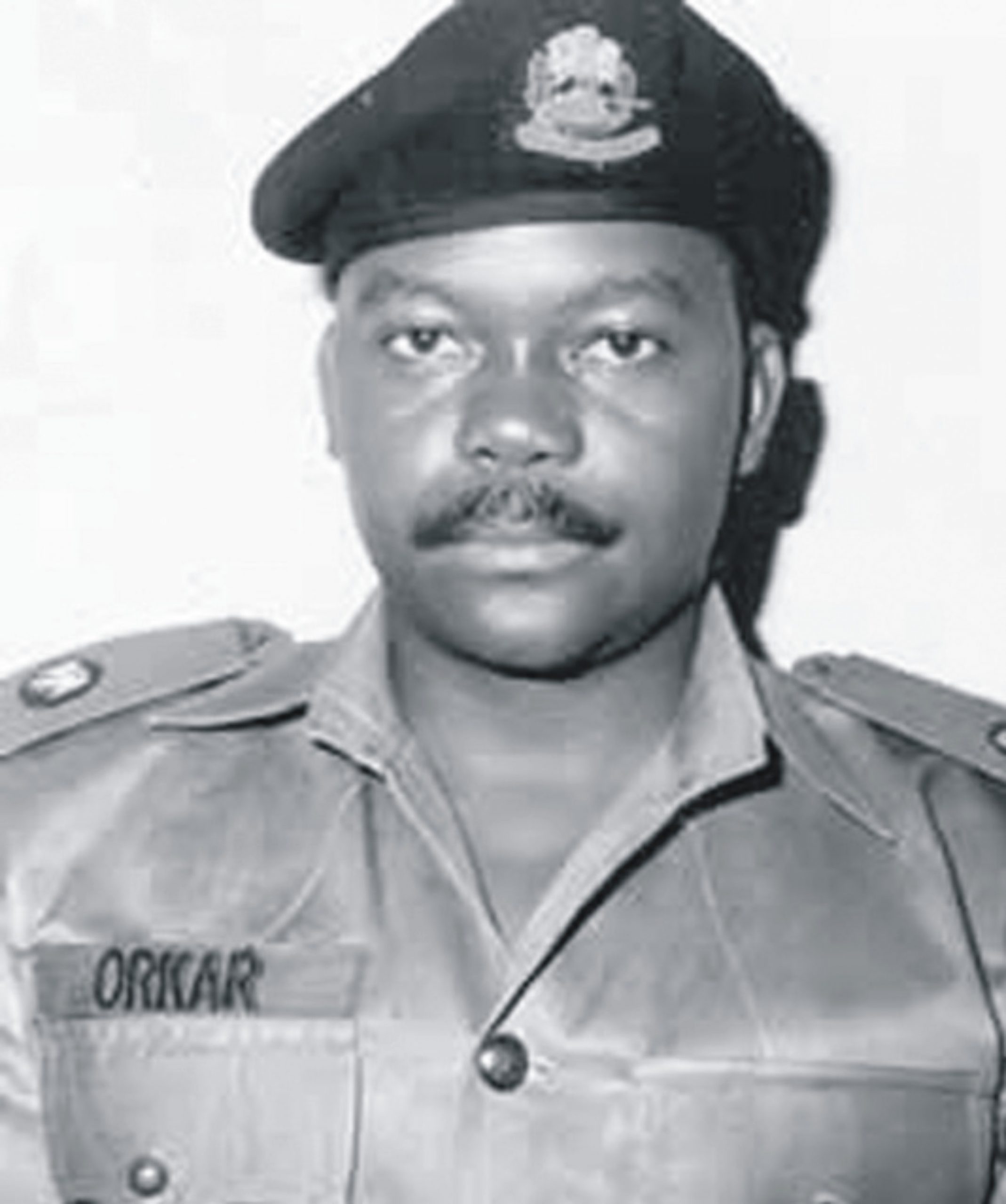 Thirty years ago today, exactly on Sunday, April 22, 1990, the voice Gideon Orkar, a major in the Nigerian Army, welcomed Nigerians to the 7:00am news bulletin of Radio Nigeria. His mission: announcing the overthrow of Ibrahim Babangida as the military president.

The highlight of his speech was the excision Sokoto (today’s Sokoto, Kebbi and Zamfara), Borno (Borno and Yobe), Katsina, Kano (now Kano and Jigawa) and Bauchi (now Bauchi and Gombe) from the Federal Republic of Nigeria.

Babangida’s ADC, UK Bello, a colonel, was killed in the plot that was foiled later in the day.

Other coup leaders were Tony Nyiam, a Lt. Col., and Saliba Mukoro, a Major, while Great Ogboru, the APC candidate in the last governorship election in Delta state, was alleged the financier.

Nyiam and Mukoro were sentenced to death in absentia — they had fled the country after the coup failed.

In July same year, Major Orkar and 41 others were convicted for treason and executed by firing squad.

Nine other defendants were jailed while 31 soldiers were acquitted.

There was a twist — some of the condemned officers cried foul as they were about to be executed, alleging that some of those discharged were co-plotters but only got away for ethnic reasons.

Reproduced below is the coup broadcast made by Major Orkar.

Fellow Nigerian Citizens, on behalf of the patriotic and well-meaning peoples of the Middle Belt and the southern parts of this country, I , Major Gideon Orkar, wish to happily inform you of the successful ousting of the dictatorial, corrupt, drug baronish, evil man, deceitful, homosexually-c­­entered, prodigalistic, un-patriotic administration of General Ibrahim Badamosi Babangida.

We have equally commenced their trials for unabated corruption, mismanagement of national economy, the murders of Dele Giwa, Major-General Mamman Vasta, with other officers as there was no attempted coup but mere intentions that were yet to materialise and other human rights violations.

The National Guard already in its formative stage is disbanded with immediate effect. Decrees Number 2 and 46 are hereby abrogated. We wish to emphasize that this is not just another coup but a well-conceived,­­ planned and executed revolution for the marginalized, oppressed and enslaved peoples of the Middle Belt and the south with a view to freeing ourselves and children yet unborn from eternal slavery and colonisation by a clique of this country.

Our history is replete with numerous and uncontrollable instances of callous and insensitive dominatory repressive intrigues by those who think it is their birthright to dominate till eternity the political and economic privileges of this great country to the exclusion of the people of the Middle Belt and the south.

They have almost succeeded in subjugating the Middle Belt and making them voiceless and now extending same to the south.

It is our unflinching belief that this quest for domination, oppression and marginalisation­­ is against the wish of God and therefore, must be resisted with the vehemence.

For the avoidance of doubt, we wish to state the three primary reasons why we have decided to oust the satanic Babangida administration.­­

The reasons are as follows:

(1) To stop Babangida’s desire to cunningly install himself as Nigeria’s life president at all costs and by so doing, slowpoke the progress of this country for life. In order to be able to achieve this undesirable goals of his, he has evidently started destroying those groups and sections he perceived as being able to question his desires.

Examples of groups already neutralized, pitched against one another or completely destroyed are:

(b) The destruction of the peoples of Plateau State, especially the Lantang people, as a balancing force in the body politics of this country.

(c) The buying of the press by generous monetary favors and the usage of State Security Service, SSS, as a tool of terror.

(d) The intent to cow the students by the promulgation of the draconian Decree Number 47.

(e) The cowing of the university teaching and non-teaching staff by an intended massive purge, using the 150 million dollar loan as the necessitating factor.

(f) Deliberately withholding funds to the armed forces to make them ineffective and also crowning his diabolical scheme through the intended retrenchment of more than half of the members of the armed forces.

Other pointers that give credence to his desire to become a life president against the wishes of the people are:

(1) His appointment of himself as a minister of defence, his putting under his direct control the SSS, his deliberate manipulation of the transition programme, his introduction of inconceivable, unrealistic and impossible political options, his recent fraternization with other African leaders that have installed themselves as life presidents and his dogged determination to create a secret force called the national guard, independent of the armed forces and the police which will be answerable to himself alone, both operationally and administrativel­­y.

It is our strong view that this kind of dictatorial desire of Babangida is unacceptable to Nigerians of the 1990s, and, therefore, must be resisted by all.

Another major reason for the change is the need to stop intrigues, domination and internal colonization of the Nigerian state by the so-called chosen few. This, in our view, has been and is still responsible for 90 percent of the problems of Nigerians.

This indeed has been the major clog in our wheel of progress.

This clique has an unabated penchant for domination and unrivalled fostering of mediocrity and outright detest for accountability,­­ all put together have been our undoing as a nation.

This will ever remain our threat if not checked immediately. It is strongly believed that without the intrigues perpetrated by this clique and misrule, Nigeria will have in all ways achieved developmental virtues comparable to those in Korea, Taiwan, Brazil, India, and even Japan.

Evidence, therefore, this cancerous dominance has as a factor constituted by a major and unpardonable clog in the wheel of progress of the Nigerian state. It is suffice to mention a few distasteful intrigues engineered by this group of Nigerians in recent past. These are:

(1) The shabby and dishonorable treatment meted on the longest serving Nigerian general in the person of General Domkat Bali, who in actual fact had given credibility to the Babangida administration.

(2) The wholesale hijacking of Babangida’s administration by the all-powerful clique.

(3) The disgraceful and inexplicable removal of Commodore Ebitu Ukiwe, Professor Tam David-West, Mr. Aret Adams and so on from office.

(4) The now-pervasive and on-going retrenchment of Middle Belt and southerners from public offices and their instant replacement by the favoured class and their stooges.

(5) The deliberate disruption of the educational culture and retarding its place to suit the favoured class to the detriment of other educational minded parts of this country.

(6) The deliberate impoverishment of the peoples from the Middle Belt and the south, making them working ghosts and feeding on the formulae of 0-1-1- or 0-0-0 while the aristocratic class and their stooges are living in absolute affluence on a daily basis without working for it.

(7) Other countless examples of the exploitative, oppressive, dirty games of intrigues of its class, where people and stooges that can best be described by the fact that even though they contribute very little economically to the well-being of Nigeria, they have over the years served and presided over the supposedly national wealth derived in the main from the Middle Belt and the southern part of this country, while the people from these parts of the country have been completely deprived from benefiting from the resources given to them by God.

The third reason for the change is the need to lay a strong egalitarian foundation for the real democratic take off of the Nigerian state or states as they circumstances may dictate.

In the light of all the above and in recognition of the negativeness of the aforementioned aristocratic factor, the overall progress of the Nigerian state a temporary decision to excise the following states namely, Sokoto, Borno, Katsina, Kano and Bauchi states from the Federal Republic of Nigeria comes into effect immediately until the following conditions are met.

The conditions to be met to necessitate the re-absorption of the aforementioned states are as following:

(a) To install the rightful heir to the Sultanate, Alhaji Maccido, who is the people’s choice.

(b) To send a delegation led by the real and recognized Sultan Alhaji Maccido to the federal government to vouch that the feudalistic and aristocratic quest for domination and operation will be a thing of the past and will never be practiced in any part of the Nigeria state.

By the same token, all citizens of the five states already mentioned are temporarily suspended from all public and private offices in Middle Belt and southern parts of this country until the mentioned conditions above are met.

They are also required to move back to their various states within one week from today. They will, however, be allowed to return and joint the Federal Republic of Nigeria when the stipulated conditions are met.

In the same vein, all citizens of the Middle Belt and the south are required to come back to their various states pending when the so-called all-in-all Nigerians meet the conditions that will ensure a united Nigeria. A word is enough for the wise.

This exercise will not be complete without purging corrupt public officials and recovering their ill-gotten wealth, since the days of the oil boom till date. Even in these hard times, when Nigerians are dying from hunger, trekking many miles to work for lack of transportation,­­ a few other Nigerians with complete impunity are living in unbelievable affluence both inside and outside the country.

We are extremely determined to recover all ill-gotten wealth back to the public treasury for the use of the masses of our people. You are all advised to remain calm as there is no cause for alarm. We are fully in control of the situation as directed by God. All airports, seaports and borders are closed forthwith.

The former Armed Forces Ruling Council is now disbanded and replaced with National Ruling Council to be chaired by the head of state with other members being a civilian vice-head of state, service chiefs, inspector general of police, one representative each from NLC, NUJ, NBA, and NANS.

A curfew is hereby imposed from 8 p.m. to 6 a.m. until further notice. All members of the armed forces and the police forces are hereby confined to their respective barracks.

All unlawful and criminal acts by those attempting to cause chaos will be ruthlessly crushed. Be warned as we are prepared at all costs to defend the new order.

All radio stations are hereby advised to hook on permanently to the national network programme until further notice.

Long live all true patriots of this great country of ours. May God and Allah through his bountiful mercies bless us all”.