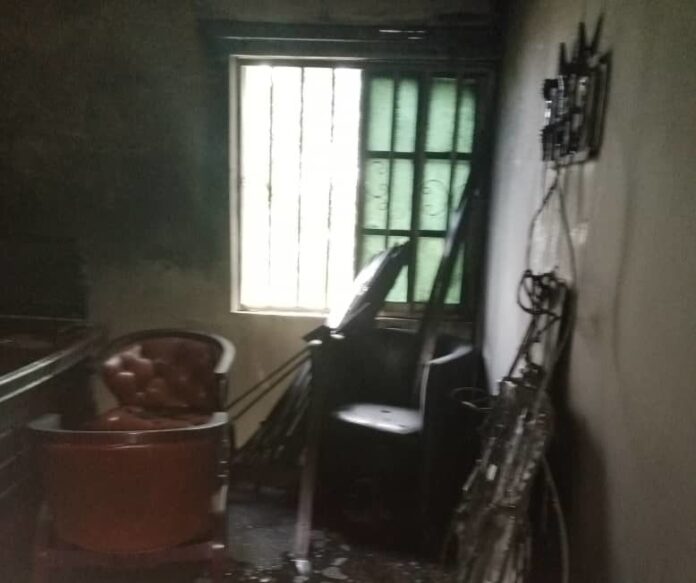 Premium Times head office in Abuja was on Friday, October 15, affected by a fire incident, damaging the newspaper’s newsroom and destroying properties.

According to the newspaper, the fire started from the office of the newspaper’s editor-in-chief, Muskilu Mojeed shortly after he left for jumaat prayers.

Premium Times, in a report published on its website, said a thick smoke biĺlowing from the office alerted editors next door to the incident who forced the door open but were pushed back by the smoke.

The online publication said it immediately contacted the federal and FCT fire services to help tame the inferno, while the first evacuating the building of staff.

According to Premium Times,  attempts to use extinguishers to battle the inferno before the firefighters arrived at the scene in the Wuse area of Abuja were unsuccessful.

The fire was said to have destroyed the office of the Editor-in-Chief and sprayed soot on the newsroom and other offices.

Computers, printers, furniture, documents, as well as the personal effects of Mojeed were all destroyed.

The fire, which started at about 1.30 p.m., forced the newspaper to cancel its weekly editorial meeting.

Staff members were baffled by the suddenness of the fire. But fire officers suspected an electrical fault as the cause.

Commenting on the incident, Assistant Managing Editor, Bisi Abidoye, who witnessed the incident, lamented its havoc on the office of the Editor-in-Chief.

“We noticed smoke billowing from the Editor-in-Chief’s office about 20 minutes after he left for the mosque. It was all so sudden and the damage was so severe,” he said.

Abidoye said the incident has been reported to the authorities for formal investigations.