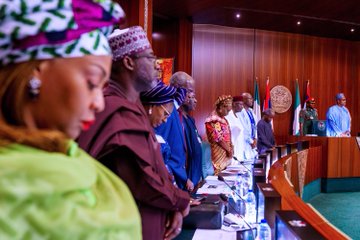 The Federal Executive Council (FEC) may be divided, following the Minister of Communications and Digital Economy, Isa Pantami’s rejection of government’s proposal to impose excise duty on telecommunication services.

The Federal Government had, at a stakeholders’ Forum on the implementation of excise duty on telecommunications services in Nigeria, disclosed that it was considering introducing a five per cent excise tax on telecoms services.

Therefore, the Minister urged the government to consider taxing other sectors of the economy, especially those areas that are not making as much contribution as the telecommunications sector, which has made huge inputs  in boosting the country’s economy.

“The ministry of communications and digital economy is not satisfied with any effort to introduce excise duty on telecommunication services,” he said.

I wasn’t part of any meeting in Abuja today – Sen.…

“A sector cannot be a consumer today; each sector must contribute a certain percentage to the economy. And if we fail to do that, we would be increasing the pressure and by doing that we would be destroying the digital economy sector.

“Excise duty is introduced to discourage the consumption of certain commodities like alcohol, and tobacco. But today, without broadband penetration, how can you perform financial transactions, how can you deliver lectures without that, how can you work in a hospital, these services are a necessity.”

The minister faulted the timing of the proposal which he said is unacceptable, adding that the telecom companies contribute two per cent excise duty to the NCC already while telecom consumers also pay 7.5 per cent for consuming telecom services.

“We will make further steps to fight it. As a minister, based on the provision of the constitution of Nigeria, section 148, we are exercising the powers of Mr. president,” he added.

“That is what the constitution says. At least, I am a major stakeholder. When the 7.5 per cent VAT was added, I was not consulted, I only heard the announcement. And I think there is something questionable, and I am glad that we are on the same page with our national assembly members here, they were not consulted, and they are part of the committees.

“Beyond making our position known, we will go behind the scenes and go against any policy that will destroy the digital economy sector. We will go to any extent to legitimately and legally defend its interest.”

(OPINION) FITTING FAREWELL FOR THE LAST OF THE FOUNDING SEPTET

I wasn’t part of any meeting in Abuja today – Sen. Dickson