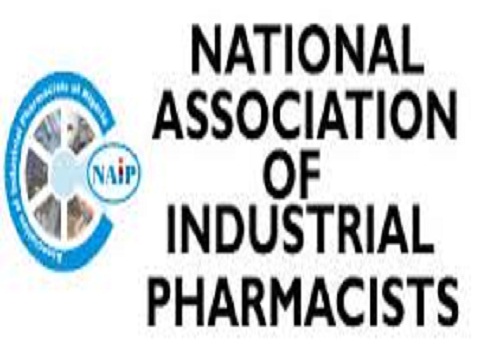 The Association of Industrial Pharmacists of Nigeria (NAIP) has called on the Federal Government to create enabling environment for modern technology for pharmaceutical revolution in Nigeria.

Mr Ignatius Anukwu, the National President of the association, made the appeal on Thursday in Ilorin at the fifth NAIP Day, organised by its Kwara banch.
He noted that a national policy was important to align industry with technology, adding that such policy will reduce the amount of drugs being imported into the country.
Anukwu, who was represented at the occasion by the Vice-Chairman of the association, Alhaji Gana Ahmed, said about 90 per cent of raw materials for pharmaceuticals are imported into Nigeria.
He reiterated that Nigeria must take advantage of modern technology in the pharmaceutical industry.

READ ALSO:APC welcomes court order restraining INEC Adamawa Gov. election
Speaking earlier, Mr Gbenga Banbe, the Kwara Chairman of association, said that the biggest challenge for Nigeria was for the industry to align with technology, while getting the pharma-employees to be more innovative and responsive in their thinking to enable optimal use of modern technology.
“Technology advancement has become increasingly critical for firms including pharmaceutical companies in order to achieve competitive advantage,” he said.
According to him, many industries and healthcare sectors are experiencing own digital transformations, as there are new ways in helping patients manage and overcome illness.
He lamented that the technological revolution in Nigerian pharmaceutical industry was slow and in most parts missing out.
He explained that tech-revolution will help during new drug development and reduce development costs, tackle a lot of productivity challenges at formulation and produce output and quality management system of facility, among others.
Dr Abiola Shittu of the Department of Pharmaceutics and Industrial Pharmacy, University of Ilorin, in his presentation said through legislative reform, India’s pharmaceutical industry is one of the fastest growing segments of the Indian economy.
“Currently, Indian pharmaceutical companies produce between 20 and 22 per cent of the world generic drugs and offer 60,000 finished medicines and nearly 400 bulk used informulations,” he said.

READ ALSO:Osinbajo meets Bauchi, Adamawa govs
Shittu, who teaches at the Faculty of Pharmaceutical Sciences of the university, advised government to establish a National Biotechnology programme that would consist of a National Commission on Biotechnology, also establish a Biotechnology Centre and Bio-safety Authority.
He also called for waiver of tax on research materials and equipment, and to encourage specialised technological financing agencies to provide loans to firms or consortia and research institute, among others. (NAN)