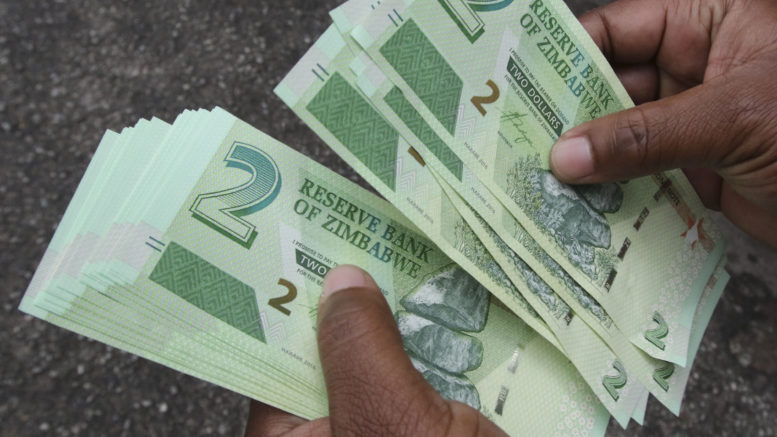 Zimbabwe’s new currency traded at 2.7 against the U.S. dollar on the interbank market on Thursday, its weakest level since the central bank last month removed a peg for its surrogate bond notes and electronic dollars, official data showed.

Reserve Bank of Zimbabwe (RBZ) data showed in Harare that the mid rate was at 2.7 to the dollar on Thursday, but banks are allowed to buy and sell U.S. dollars at 2.5 per cent either side of that rate.

On the black market, the RTGS (currency) rate was unchanged at 3.8 to the dollar.

Harare ditched the discredited 1:1 dollar official peg on February 20, and merged the bond notes and electronic dollars into a transitional currency called the RTGS dollar.

The value of that currency had held unchanged at 2.5 to the U.S. dollar since February 22, leading to accusations the central bank was manipulating the exchange rate.

READ ALSO: Barcelona rule injured Dembele out for up to four weeks

Governor John Mangudya told parliament on Monday that he expected the RTGS dollar to weaken further by the time important tobacco auctions open next Wednesday.

Tobacco is Zimbabwe’s second-largest earner of foreign currency after mining and last year brought in more than $800 million.

Dealers at local banks said the central bank was still drip-feeding the market with some dollars, which some saw as an attempt to influence the exchange rate.

“The message from the RBZ is that ‘we don’t want irresponsibility’ from the banks, which has been taken to mean that they want a gradual weakening of the exchange rate up to a certain level,” a dealer at a local bank said.

Zimbabwe’s economy has been crippled by a cash crunch that has caused shortages of fuel, food and medicine, the latter of which doctors say is crippling public hospitals. (NAN)

Barcelona rule injured Dembele out for up to four weeks