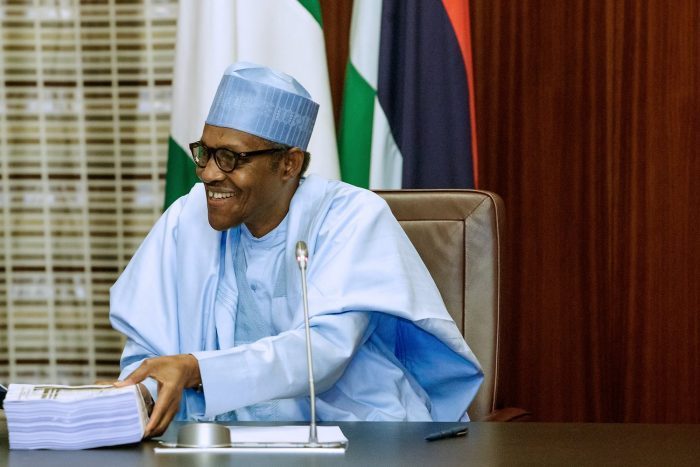 President Muhammadu Buhari has promised to go the extra mile to further the cordial relationship between the Executive and the Legislative arms of government.

Buhari made the pledge on Friday at the unveiling of the Legislative Agenda of the 9th House of Representatives in Abuja.

Represented by the Minister of Environment, Dr Mohammed Abubakar, Buhari said that he was ready to do all it takes to sustain the relation for the benefit of all Nigerians.

Buhari said that the agenda was well thought and out together to benefit the country.

He charged the lawmakers to make laws that would protect Nigerians, enhance international relationships and boost the economy.

The president assured the house that all heads of Ministries, Departments and Agencies (MDAs) will appear before the various committees for budget defence.

According to Buhari, anything short of that will be undermining the National Assembly and by extension, the Nigerian people.

The President of the Senate, Sen. Ahmed Lawal said that the National Assembly wants to see an all inclusive economy with jobs for youths and a secured Nigeria.

He said that the legislature wants to see 70 per cent of Nigerians living in rural areas have access to basic facilities and government support.

Lawal said that the objectives of the legislature was inline with those of the Executive and that both arms will work together to achieve it.

The senate president said that only the October window will available for the heads of MDAs to defend their various budgets.

He said any MDA that fails to utilize the window with not have another chance to do so and will not have a budget for its 2020 operations.

According to the senator, those heads of MDAs who want to travel abroad without defending their budget can do so but they will not be a second chance to defend budget after October.

In his remarks, the Speaker of the House of Representatives, Mr Femi Gbajabialmila said that the document that was being presented to the public is the product of extensive deliberations and contributions from within and outside the green chambers.

He said that the house listened to people from all works of life and factored in the concerns of various constituencies, to identify and articulate a set of priorities.

According to to him, the priorities of addressed responsibly will change the face of our nation and improve the lives of millions of our people.

“We have codified in these pages an ambitious agenda that we absolutely intend to achieve.

“First among these, is to reform the way the House of Representatives manages its own affairs in every area from the administration of our finances to the operations of the committee system and the process of vote taking and recording in the House.

“Our goal is accountability and transparency because as we seek to drive reforms across the government, we are obliged to make sure our own House is in the best order,” he said.

The speaker said that the house collaborated with the private sector to outline a set of objectives and develop a programme of activities that will facilitate increased investment, encourage innovation and drive economic growth.

The Chief Justice of the Federation, Justice Muhammad Tanko pledge led the support of the Judiciary for Legislative arm.

Represented by the Justice John Toho of the Appeal Court, Tanko said that democracy will not survive with out the legislature.

He said that the onus lies in the hands of the legislators to stair governance and the destiny and fate of the country.

Tanko expresses confidence in the lawmakers to lead the country in the right direction for the benefit of all Nigerians.

Mr Clement Nwankwo, Executive Director of Policy and Legal Advocacy Centre (PLAC) said that the agenda was a very important road map of the house.

He urged the lawmakers to prioritise Electoral Act amendment and Constitutional reforms to further stabilise the nation’s democracy.

Nwankwo congratulated the house and pledged PLAC’ commitment to supporting the institution for enhance performance. (NAN)