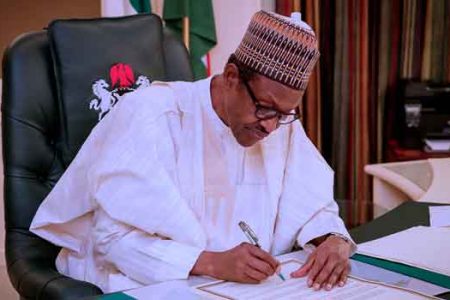 President Muhammadu Buhari may have approved the suspension of 12 senior officials of the Economic and Financial Crimes Commission (EFCC), believed to be top loyalists of the suspended chairman, Ibrahim Magu.

Sources said that the suspension followed a letter, on Tuesday, from Mr. Abubakar Malami, Attorney-General of the Federation (AGF) and Minister of Justice, to Mohammed Umar, Acting Chairman of EFCC, notifying him of the suspension of the directors.

Malami, as the AGF and Minister of Justice is the supervisory agency for the EFCC.

However, there are worries about the timing of the suspension as it is alleged that some of the directors affected by the action have been a part of the team investigating Malami.

And there has been an avalanche of documents detailing alleged misdeeds of the Minister, fueling speculations that officials sympathetic to the disgraced ousted EFCC chairman may be fighting back.

Reports noted that the suspensions affected senior officials who worked closely with Magu. Now, many of them are trying to distance themselves from him and his activities as head of the anti-graft agency in order to see if their suspension can be reversed.

One of those affected in the clearance of all Magu top loyalists include the Executive Secretary, Olanipekun Olukoyede.

According to a source, “they were suspended for various alleged criminal and corrupt infractions. All the top officials in the agency have been suspended, their offices locked, to prevent any tampering with files at the commission.”

The source said Umar Abba survived the temporary purge, as he was found not to be a part of the officials suspected underhand dealings in the agency.

Olukoyede, who became the Secretary to the EFCC, in November, 2018, following confirmation by the Senate, was a former Chief of Staff to Magu.

He replaced Emmanuel Aremo, whose five-year tenure expired in July 2018.

The former acting chairman of the EFCC is facing a second week of grilling by the Presidential panel, over allegations of financial improprieties and including money laundering.

In addition, Magu is facing allegations of re-looting funds recovered by the Commission, accepting bribes to pervert cases of graft and mismanagement of assets recovered by the EFCC. One of the allegations of corruption against Malami is that he illegally ordered the auction of crude oil and diesel seized by the Nigerian Government from an oil firm known as Omoh-Jay Nigeria Ltd.

But the Minister said that all his actions followed due process. But sources said that already, the EFCC have started probing his activities and conduct as Minister.

JUST IN: Magu not in our custody, he’s being ‘held’ by Presidency – Police

Keyamo vs NASS: Buhari backs minister over creation of 774,000 jobs