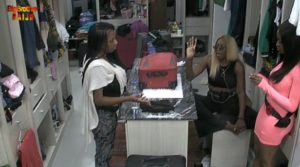 News Agency of Nigeria (NAN) reports that Isilomoh told Ella that they needed to stick together and not nominate each other during the course of the show.

She said this while comforting Ella who took time to share her life struggles before the show, especially her relationship with her parents.

Ella and Isilomo were in the Head of House room when she started talking about her musical journey.

She also talked about how her father didn’t support her and wanted her to get married young. She also said that her mother was her rock and support system.

It became emotional when she started talking about her mom and tears started flowing while she found a shoulder to cry on in Isilomo.

During the conversation, Isilomo comforted Ella when she cried about how much she missed her mother these past few days.

NAN reports that as the conversation was ongoing, Isilomo  made her alliance strategy known to Ella.

She said, “We need each other to get to the finish line so I would like you not to Nominate me sometime”.

Ella pointed out that housemates were not allowed to form alliances and did not give Isilomo a concrete answer.

NAN reports that as the show enters the third day, Isilomo and Ella are among housemates that have formed pairings as the 21 participants continue to battle for prizes worth 60 million Naira. (NAN)

NASS most porous parliament in the world–Gbajabiamila