Vomiting in pregnancy, a sign your child may have higher IQ – Experts 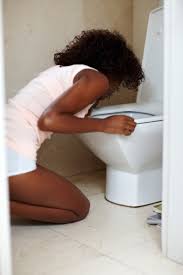 Looks like scientists have discovered some benefits for people who suffer from nausea and vomiting in pregnancy. And you know what they say, “no pain, no gain.”

Vomiting during pregnancy can be very unpleasant and uncomfortable. But, here’s the brights side, research has shown that it’s a sign your baby has high IQ

A study has revealed that if you suffer from pregnancy sickness, you may likely have a child whose IQ is higher than his or her mates.

The full meaning of IQ is Intelligent Quotient, a way of measuring intelligence in humans. This simply means that your child would be sharper and more intelligent than other kids the same age.

Usually, many mums worry that their sickness is messing up how much nutrients the baby gets to receive.

They worry that it is affecting the baby’s overall development.

Amazingly, Researchers at the Hospital for Sick Children in Toronto, Canada, have found that instead of affecting the baby in a bad way, your sickness and vomiting increases the child’s intelligence.

For the research, scientists looked at 121 children. These children were between the ages of three and seven. Their mothers suffered from morning sickness and vomiting during their pregnancy.

Instead of being behind as many mums fear, it was discovered that these children were likely to score higher on IQ, memory and language skill tests.

Lead researcher, Dr Irena Nulman, told Reuters Health that the findings suggest that nausea and vomiting in pregnancy are not harmful and in fact may enhance favourably children’s long-term mental development.

However, it is not yet clear what the cause of nausea and vomiting in pregnant women is. But it is very common in expecting mothers, especially during the first trimester.

It has been related to hormones that are responsible for the baby’s development. However, the causes are yet to be proven.

How to overcome nausea in pregnancy

The following tips will help you overcome morning sickness and vomiting in pregnancy.

Nausea is even worse when you’re feeling it on an empty stomach. It feels like you’re going to vomit your insides. To prevent this, eat dense foods that stay awhile in your system. Those foods include beans, fish, meat, avocado, and yoghurt.

Exercise helps you fight morning sickness and that feeling of wanting to vomit. Take early morning or evening walks outside. A bit of fresh air won’t hurt.

Ginger is another way to fight morning sickness and nausea. Also, it is quite cheap and easy to prepare. Just peel the ginger, wash it well, and then slice in boiling water. Give it some time to soak and brew. Filter the water out and drink away.

Have snacks close by

This is especially important because sometimes nausea may come when you’re not home and therefore not close to food. Nausea is at its worst when your stomach is empty. So always having a snack or two nearby is very important. To keep nausea away, carry some in your bag, in your car, and beside your bed.

Having a cold bath can help keep nausea away. So if you’re feeling like vomiting, try showering with cold water. Doesn’t even have to be a complete bath.

If a pool or water is rushing somewhere close, stick your head in there and let the water wash over your head.

The sharp scent of peppermint oil can help keep nausea away. A small touch of the oil in a handkerchief is all you need. Keep the handkerchief in your bag for any time you feel nauseous.

Take the handkerchief out and have a whiff of the peppermint oil.

Rest assured, vomiting during pregnancy will not harm your baby physically. The only other discomfort apart from the vomiting itself is sore muscles on your belly. But if the vomiting goes on for a long period. of time, you should see your doctor.