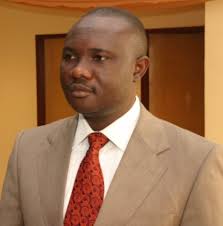 The Economic and Financial Crimes Commission (EFCC) on Friday, called its third witness in  a Federal High Court in Lagos, in the ongoing fraud trial of a former Director of the Niger Delta Development Commission (NDDC), Tuoyo Omatsuli.

Omatsuli is charged alongside, Don Parker Properties Ltd, Momoh and Building Associates Ltd on November  28, 2018, on 45 counts of g on corruption, gratification, fraud and money laundering.

They had pleaded not guilty to the charges and were granted bails.

EFCC has since opened its case and is still leading witnesses in evidence.

Led in evidence by Iheanacho, the witness said he worked with Heritage Bank for three and half years, but has been in the banking sector for 16 years.

He said that his schedule of duty involved liaising with all Law Enforcement agencies and banking regulators adding that he receives requests and inquiries from them, and then respond to their request.

He said that sometime in 2016, 2017 and 2018, he received request from the commission to produce account opening document and statement of account of four companies namely :

He said that same was obliged to the commission.

When shown his responses to the EFCC, he confirmed same and the prosecution tendered it in evidence before the court.

The court admitted and marked them as exhibit ETO3, ETO4, ETO5, ETO6, and ETO 7.

On the transaction of November 11, 2014, the witness said that there was an inflow into the account of Asiladreen in the sum of N160million from the Diamond Bank account of Business Associates Ltd.

On Dec. 24, 2014, he said that there was another inflow of N16million from Building Associates to same account.

He said that from the account mandate, its sole signatory is Eyo Bassey Francis.

He said that on March 11, 2015, there was an inflow into the account of Guma Oil and Gas Ltd from College Pro in the sum of N227 million.

He said that the details of the beneficiaries cannot be seen on the face of the document except its instrument.

The witness said that on April 26, 2016, there was an outflow of N179million from Starline, while on August 17 and October 14, 2016, there were inflows of N229 million and N477million respectively, from NDDC into Starline.

Under cross examination, first defence counsel Prof. A. Amuda Kehinde, asked the witness to check the exhibit and tell the court if he can find the name of the first defendant either collecting or signing out money.

The witness replied that on the face of the document, one cannot ascertain who collected money unless the instrument is seen.

When asked to confirm that the name of Momoh was not also in the exhibit, the witness replied that the papers were account opening documents and statement of account of bank customers.

He added that details of transactions like payment instructions were not captured.

According to the charge, the accused were alleged to have committed the offence between August 2014 and September 2015.

The first accused was said to have procured the third and fourth accused (Momoh and Building Associates) to utilise a total sum of N3.6 billion paid by Starline Consultancy Services Ltd into an account operated by fourth accused.

The prosecution said that they ought to have known that the said sums, formed part of the proceeds of their unlawful activities which includes corruption and gratification.