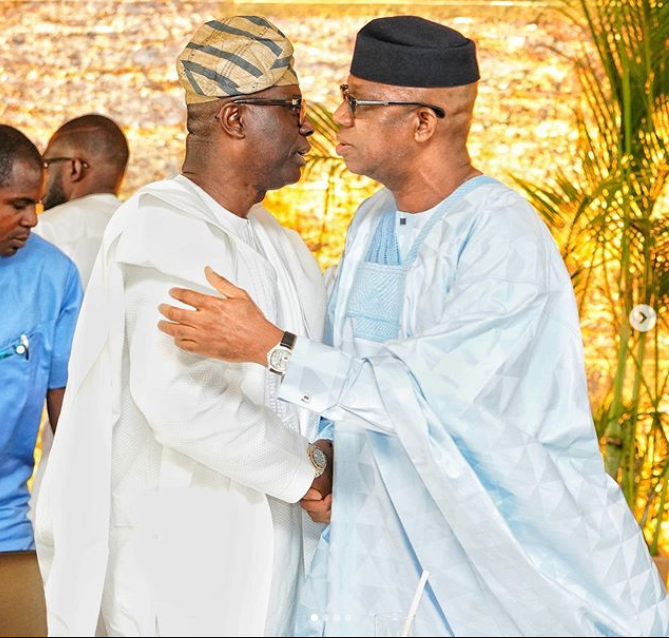 Lagos State Governor, Mr Babajide Sanwo-Olu, and his Ogun State counterpart, Dr. Dapo Abiodun, on Monday made history with the signing of Memorandum of Understanding, MOU on the Lagos-Ogun Joint Development Commission.

The signing took place at the Presidential Lodge, Ogun State and was witnessed by top government functionaries from the two states.

The Commission will see to the development of infrastructure such as roads, security, among others in border towns between the two states.

Governor Babajide Sanwo-Olu, in his speech said the megacity status of Lagos State necessitated the need for synergy between Lagos and nearby state of Ogun in the area of development.

“Lagos, as a megacity with a population of over 22 million people reaffirms the need for greater synergy with other states
especially our immediate neighbors for sustainable socio economic development.
Our commitment to ensuring that Lagos becomes a 21st century economy makes it imperative for us to strategically collaborate with our closest neighbor, Ogun State, for the joint development of our states, the continued growth of our cities
and the co-creation of value that encompasses good governance and urban regeneration,” Sanwo-Olu said.

The governor described the MOU as “a game changer that will transform the urban agglomeration that Lagos State has become.”

” We are driven by the desire to stimulate socio-economic growth, bridge
development gaps and ensure that Lagos State’s megacity status is complemented by pervasive infrastructural development even in boundary towns.

The Memorandum of Understanding precedes the Joint Development Commission that will be established to mutually tackle some of the issues prevalent in key economic sectors
like transportation, the environment, housing, health, infrastructure, and security.”

As a way of realising the objectives of the Commission, Gov. Sanwo-Olu said the two states will combine resources to develop border towns as well as ensure security of the two states.

“The Joint Memorandum of Understanding is a sustainable development agenda under which Lagos and Ogun States will
combine resources to meet our present socio-economic needs and prepare for the future.
We have nothing to lose but a lot to gain by synergizing efforts with Ogun State in the areas of Infrastructural development, (the development of boundary town roads,
water works, mass transportation); as well as revenue and taxation (including PAYE remittances, and boundary town
revenue management and collection). ”

Other areas the MOU will address include Trade and investment, resolution of boundary disputes, security (including
intelligence sharing and gathering), environmental and physical planning activities (including urban renewal,
emergency and disaster management, inland waterways management and traffic management), and agriculture, food security.

The governor said a joint committee will be established “that will implement the terms of the Joint Memorandum of
Understanding” pending the approval of the Lagos and Ogun States Houses of Assembly.

“I called this bilateral event a success story because whereas in the past, there might have been some initiatives between our two States but this is the first time that we will have a formal, structured framework of bilateral engagement that will be legislative backed.

It is undeniable that we share historical and cultural affinities and long before now, successive administrations have mouthed and attempted to have some omnibus or spatial arrangement to have Lagos and Ogun States to work together.

But, again, never had there been a time that this was concertized or encoded nor a law-backed structure, institutional arrangement; human and funding resource requirements formalized to actualize what and remains the right way to uplift our people improve their prosperity,” he said.

Gov. Abiodun further said the MOU “takes cognizance of what had been envisioned, leading to the establishment of the Prof. Akin Mabogunje’s Committee on Redeployment of Lagos Megacity Region Plan in 2005-6.”

He said the two states will “forge a common alliance to jointly tackle issues bordering on security, sanitation, traffic and transportation, waste management, water supply, land use planning, infrastructure development and maintenance, urban renewal and slum upgrading for the mutual benefit of our people and the generality of Nigerians.”

He further said with the MOU, development will come to border communities in Ota; Akute Alagboole; Lambe; Ojodu; Agbado; Mowe; Warewa; Isheri and all the eight local government areas that share boundaries with Lagos State.

In her opening remarks, the Deputy Governor, Ogun State, Engr. Noimot Salako -Oyedele said the event was the first in the history of Nigeria, describing it as collaboration of giants.

” Lagos and Ogun States has lots in common social and economically. The economies of both states starts to benefit from this collaboration. We are going to transform the economy of both states,” she said.

The Attorney-General of Lagos State, Mr. Moyosore Onigbanjo (SAN), who gave goodwill message on behalf of other cabinet members from Lagos, said the collaboration between the two governors would improve development in the South West and the rest of the nation.

“This is the day that the two governors in the South West Nigeria decided to formalise relationship between them. This will galvanise developments in South West. The people of the two states will reap benefits from this. The advantage that Lagos has will be joined with the advantage of Ogun State. We want to thank the two governors for signing the the MOU. This will.trigger same reaction across the nation..”

The Chairman, All Progressive Congress, APC, Chief Yemi Sanusi commended the two governors, adding it will foster cordial relationship between residents of the two states.

The Alake of Egbaland, Oba Adedotun Gbadebo said the end has come for robbers who run from Lagos to Ogun to hide..He also commended Governor Dapo Abiodun for his plan to make available air-conditioned commercial buses that will ply Kuto, Abeokuta and Marina, Lagos.