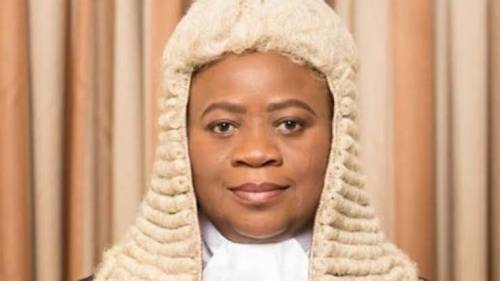 There is a grand plan to stop Monica Bolna’an Dongban-Mensem from being appointed the substantive President of the Court of Appeal in Nigeria, a report by TheCable said.

Rather, there has been a push for Mohammed Lawal Garba, who chaired the 2019 presidential election petitions tribunal, to be appointed in her place.

Although tongues are wagging that it is because Dongban-Mensem is a minority Northern Christian and Garba is a Northern Muslim, TheCable reported that the intrigues were more political than ethnic or religious.

The Federal Judicial Service Commission had recommended both Dongban-Mensem and Lawal — in that order — to the National Judicial Commission to replace Zainab Bulkachuwa, who retired in March 2020 having reached the age of 70.

Dongban-Mensem, from Plateau State, is the most senior judge in the Court of Appeal.

Instead, he appointed her in a protem position and recently renewed it for another three months, which could see her act as PCA till September 2020.

It was gathered that dirt-digging was now being employed by presidential advisers to get Dongban-Mensem disqualified and pave the way for Garba.

Her national youth service record is being scrutinised, but it was learnt that she did serve in 1980/81.

More so, according to government insiders, it would be “mysterious” to question the credentials of someone who has been screened by both the FJSC — of which Abubakar Malami, the attorney-general of the federation and minister of justice, is a member — and the NJC.

Garba, the preferred candidate, chaired the presidential election petitions tribunal which ruled in favour of President Buhari, in September 2019.

Garba had replaced Bulkachuwa as chairman of the tribunal following protests by the opposition Peoples Democratic Party over an alleged conflict of interest.

Bulkachuwa’s husband is a senator on the platform of the All Progressives Congress — the president’s party.

Buhari’s media team did not respond to questions from TheCable on why Dongban-Mensem’s name has not been sent to the senate for confirmation.

In the widely circulated letter, he wrote, “May I also invite the attention of Mr President to the pending matter of appointment of a Chief Judge of the Nigerian Court Appeal which appears to be generating public interest. As it is, the most senior Judge, Justice Monica Dongban Mensem, a Northern Christian, is serving out her second three-month term as acting Chief Judge without firm prospects that she will be confirmed substantive head.

“I do not know Justice Mensem but those who do attest to her competence, honesty and humility. She appears eminently qualified for appointment as the substantive Chief Judge of the Court of Appeal as she is also said to be highly recommended by the National Judicial Council. If she is not and is bypassed in favour of the next in line who happens to be another northern Muslim, that would be truly odd.

“In which case, even the largest contingent of PR gurus would struggle to rebut the charges that you, Mr President, is either unwilling or incapable of acting on your pledge to belong to everyone — and to no one. I hope you would see your way into pausing and reflecting on the very grave consequences of such failure not just to your legacy but to the future of our great country.” (Sahara Reporters)