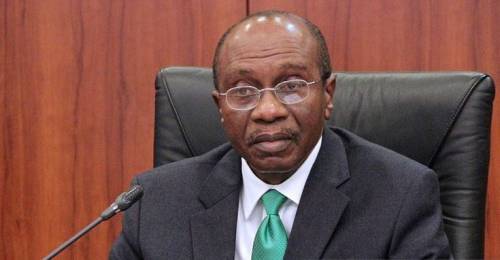 Governor of Central Bank of Nigeria, Mr. Godwin Emefiele will, on Monday, appear before the Senate Committee on Finance.

Emefiele is expected to come forward with detailed explanations on the rationale behind the exchange rates the CBN used for three key projects under the Presidential Infrastructure Development Fund.

The multi-billion-dollar projects are being funded with the Nigeria Sovereign Investment Authority.

The first three projects had already been funded to the tune of N163.8 billion.

The Chairman, Senate Committee on Finance, Senator Solomon Adeola, announced the summons in a statement on Sunday by his Special Adviser on Media, Chief Kayode Odunaro.

Adeola demanded the appearance of the CBN governor during an interactive session between the panel and the Managing Director of NSIA, Mr. Uche Orji.

The statement explained that Orji and his management team had told the committee that the contracts for the projects were denominated in Naira and that the CBN exchange rate for the disbursed fund was N325 to a dollar instead of the official rate of N305.

The Committee Chairman said, “This committee will like to see the contract documents for these projects and why the exchange rate for the dollar to naira was at N325 to a dollar instead of the official rate of N305 in a government to government transaction for these key infrastructure projects.

We are not indicting the NSIA or conducting an investigation or probe of the CBN but we like to know the reason this different rate was used but we are inviting the CBN to appear together with the NSIA on Monday.”

Adeola commended the NSIA for what it has done so far in terms of funding healthcare, education, infrastructure and investment in fertiliser production.

He, however, called for caution in disbursement even as he sought more investment in diverse areas to grow the $1.5bn Sovereign Wealth for its contributors like the Federal Government, state governments, local governments and the FCT to reap the benefits of its establishment.

Senator Ayo Akinyelure, while supporting the need for clarifications from the CBN on the exchange rates in the affected transactions, stated that the NSIA might have been shortchanged.

He added that the rates might explain the seemingly slow progress, delay and noncompletion of the key projects as some aspects would be based on the import of materials that are denominated in dollars purchased at the higher bureau de change rates.