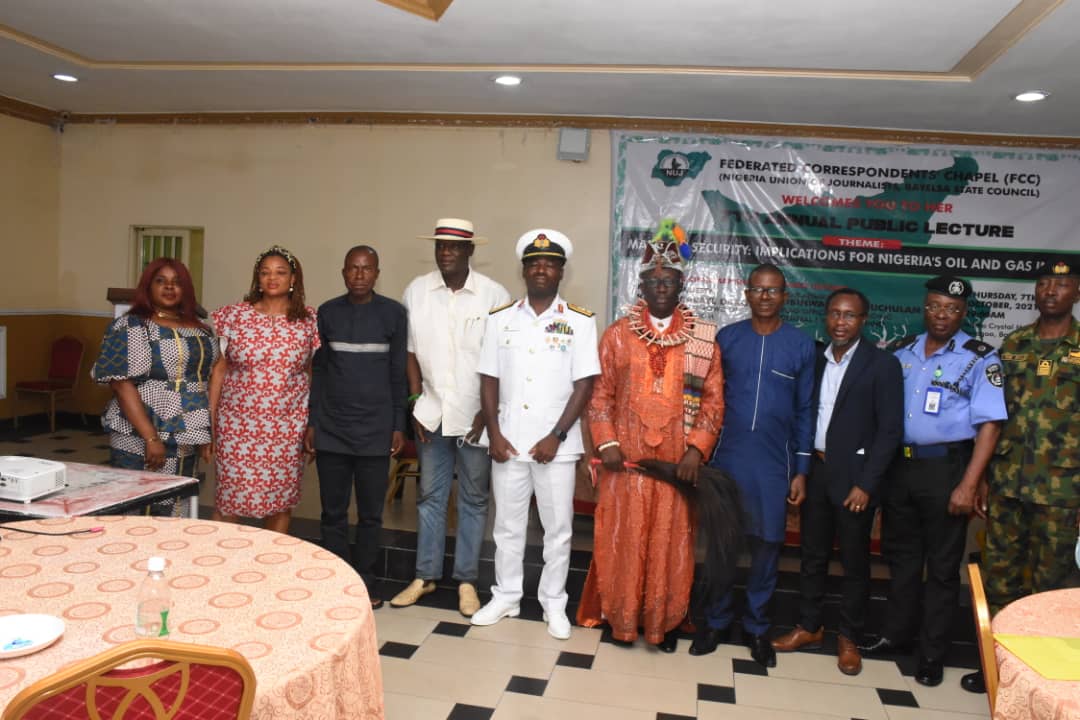 The Nigerian Navy has boasted that its efforts in the Niger Delta has checked criminal activities to some extent.

He said that efforts of the Navy had reduced criminality in the maritime domain.

This is the 7th edition of the annual lectures been organised by the Federated Correspondents Chapel, in Yenagoa.

With this year’s theme:  ‘Maritime Security: Implications for Nigeria’s Oil and Gas Industry’.

Admiral Egbuchulam, who was represented by the Commander NNS Soroh, Commondor Patrick Effah, hinted that to further sustain the security architecture in the oil rich region, the Navy plans to acquire eight helicopters and warships to add to its fleet in the area.

According to him, in  order to ensure that trade and commerce takes place within the maritime Environment, and by extension the gulf of Guinea without hitch , all form of criminality must be dealt  with.

Describing illegal bunkering and sea piracy as tops in maritime insecurity, the naval boss said “the Navy has not rested in its oars to ensure that these criminal activities are followed up headlong. Doing otherwise would seriously affect the revenue base of Nigeria.

“The Nigerian Navy has been wonderful, they have been out there performing her duty, in checkmating maritime illegality.

“One thing illegality does, it undermines revenue generation for the country, ships wouldn’t come into our water, readily when they do premium that is paid in terms of insurance is high.

“Because  the nation’s waterways  are high hob of piracy, the Nigerian Navy, has done a lot, has made tremendous efforts and the incident of piracy and sea robbery has drastically reduced,” he said.

Admiral Egbuchulam also said that piracy and sea robbery were high as at 2010 to 2012, but with the acquisition of war ships and helicopters their work has been made easy to tackle criminal activities within the waterways.

Earlier in his remarks, King Bubaraye Dakolo, who chaired the event, described  maritime insecurity as a serious issue that needed to be tackled  in all spheres in the Niger Delta region.

Describing security is a serious business and should not be left for the security agencies alone, the royal father who is also the author of the book “Oil Theft”, noted that all hands must be on deck for security of Niger delta Ned its oil activities be actualised.

Chairman of  the Federated Correspondents Chapel (FCC), Mr. Chris Eze, in his remark, noted that the annual lecture was part of efforts by the Correspondents to contribute to the development of the society as members of the Fourth Estate of the Realm  ” performing our duties as agenda setters for the citizenry ”

According to Eze, every year the leadership of the Chapel puts in place a lecture Committee charged with the responsibility to look at contemporary issues in the nation and build a theme around it.

Also in his goodwill message, Mr. Kola Oredipe, a former Chairman of the FCC, now the Director-General of New Media to Governor Douye Diri, applauded the Nigerian media for living up to its social responsibility by contributing to the advancement of the society through different instructive platforms like the lecture expressed gratitude for the current leadership of the chapel for “sustainable of this noble vision and programme initiated under my chairmanship of the FCC in 2020”

Commissioner for Information and Orientation in Bayelsa State, Mr. Ayiba Duba, commended the Federated Correspondent’s Chapel, for the  theme of lecture that concerns the state and the Niger region for a round table discussion.

An Environmentalist, Mr. Morris Alagoa, Head of Environmental Right Action, also commended the Navy for efforts in checking criminal, activities in the region.

He said that due to the illegal activities along the waterways, the legitimate activities of inhabitants are hindered.

He commended the FCC for setting the agenda for discussion and a way forward.