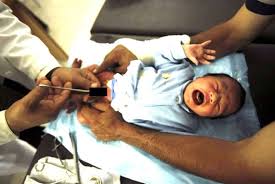 A newly-born baby from a family of migrants has died in Italy following a botched home circumcision, the second such incident in little over a week, news reports said on Wednesday.

Circumcision is the surgical removal of the foreskin, the tissue covering the head (glans) of the penis.

It is an ancient practice that has its origin in religious rites.

Today, many parents have their sons circumcised for religious or other reasons.

According to the ANSA news agency, the baby, only a few weeks old, was found dead at home in Genoa, a port city in north-western Italy, by emergency services called in by his Nigerian mother and grandmother.

“The two women have been taken in for questioning by Police amid suspicions that a third person attempted the circumcision,’’ the ANSA news agency said.

On March 25, a 5-month-old boy from a Ghanaian family, living near Reggio Emilia in northern Italy, died in hospital after his parents tried a home circumcision.

There was also a case in December when a 66-year-old man was arrested in connection with the death of a 2-year-old boy as a result of a circumcision ritual in a town north-east of Rome.

Circumcisions are expensive and not subsidised by the National Health Service, so many migrant families try to perform them on their own or rely on unlicensed doctors.

According to Mustafa Qaddurah, a paediatrician and representative of the Islamic Centre of Rome, who spoke to ANSA, “the only solution’’ is for the state to pay for the operations.

Circumcisions are often performed within Muslim and Jewish communities for religious and hygienic reasons. (dpa/NAN)