I feel sad whenever I remember my amputated leg –Udo 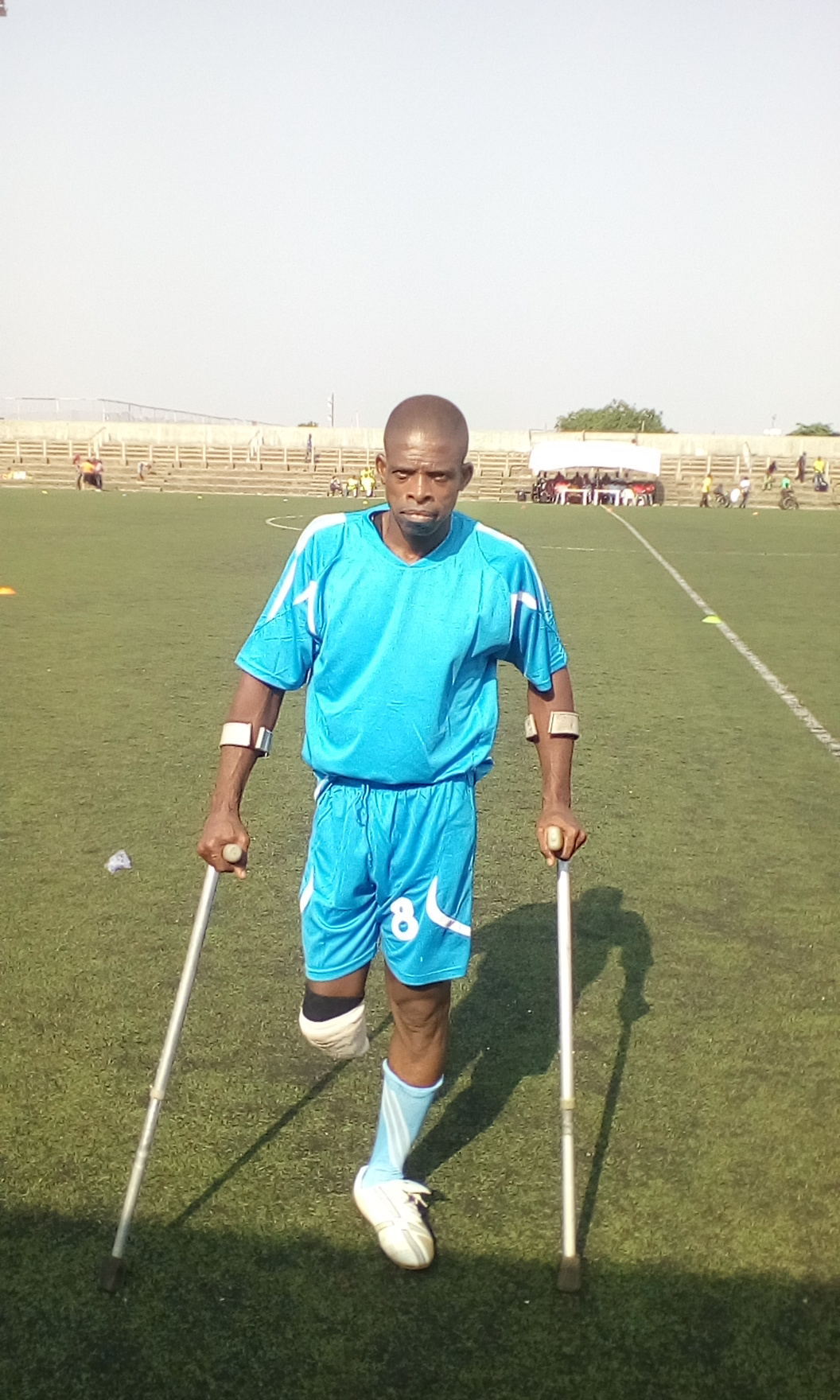 Godswill Udo is a pioneer member of Nigeria Amputee Football team popularly called ‘Special Eagles’. He along with his team mates are presently preparing to represent the country in the forthcoming Amputee Nations Cup slated for Angola in September this year.

In this interview with Ifeanyi Eduzor, the Akwa Ibom State based defender, opens up on his plans to establish Amputee Football Academy in his home state and the state of the game in the country.

As a pioneer member of the country’s Amputee football team, can you tell us how you came in contact with the game?

I came in contact with the sports through the internet. I was browsing the net one day and I saw some Europeans playing football with one leg. On further inquires, I discovered that most of them were not born disabled but had their legs amputated through accident or Polio attack when they were young.

After this, I said to myself that if these people can play football, I can equally do the same. I then made further inquires about the game and then discovered that it was in its formative stage in Lagos and that was how I joined the team and it has been fun since I became a member of the team.

What has the experience been like since you started playing the game?

The experience has been wonderful. Although, it’s not easy playing with one leg on clutches, but the fun and believe that one can do what able bodied men are doing has been the motivating factor.

Another good thing about the game is that you don’t need to be an experienced footballer or to have played football before your leg was amputated for you to master the game. All that is needed is perseverance, good training and believing in yourself which has been our guiding principle.

You missed the last year’s Amputee World Cup in Mexico, what would you say led to your not being part of the team?

I didn’t miss the World Cup because of injury or poor form but due to communication gap between me and the Federation. You know I stay in Akwa Ibom State and most times, I get information about activities of the team late not minding we’re in technological age. So, I’m using this medium to appeal to the Federation to always ensure that messages are passed across to players on time in order to give opportunity to everybody to come and fight for shirt as that is the only way to select quality players that will not only represent the country well but win laurels for Nigeria at international competitions.

Now that the Amputee Nations Cup is around the corner, do you think you still have the qualities to be part of Team Nigeria?

Well, it’s left for the coaching crew to decide who is qualified to be in Angola in September. But I know that I have what it takes to be part of the team that will be representing Nigeria at the continental showpiece. Everybody in the team knows my worth as a defender and I want to say that I don’t just go for a competition for the fun of it but go there to ensure my team wins  because I know that if I help Nigeria to bring back the trophy for the first time, my home state will compensate me  adequately  and everybody in the state and entire South- South  geopolitical zone of the country will identify with me.

Having said this, am seriously working hard just like all my team mates to ensure I make the trip to the Southern African country by the grace of God  and I promise Nigerians and the coaching crew that I will live up to expectation as I have always done for the team when on national assignment.

You’re very good in the defence and most times you create problems for attackers from the opposing team, one would like to know whether you were once a footballer?

The answer to your question is no. I never played football when I had my two legs intact. The only thing going for me is that I have the love, passion and commitment to the game. Whenever, I am playing, I always have it at the back of my mind that one player can make a lot of difference for his team and that is why I always give my best both for my club side and the national team.

One other thing is that after every match, I will go back to the drawing board and ask myself questions on how a particular striker was able to beat me and score against my team and after taking proper analysis of the whole scenario, I look at areas of corrections and make amends for the next match.

Apart from this, I also take it upon myself to practice on my own. I read a lot of manuals on amputee football and go through the internet to read about some great foreign amputee players and how they achieved success in the game. Like I explained earlier, You don’t need to be a former player to be part of the game. Constant training, determination and believing in your self has always been my guiding principle and it has helped me a lot in improving my game.

Nigeria Amputee Federation recently organized a national championship which you were part of. How would you describe the experience?

I must commend the President of Amputee Federation of Nigeria Suleiman Issah for his foresight in re- positioning the game since assumption of office. It was through his effort that we were able to participate at the last World Cup for the first time. It was very entertaining and afforded all the players opportunity to express themselves because it was the only major championship since the World Cup experience and we need more of such championships for the game to grow. We need more of such competitions for the game to grow in the country.  All the players and officials and fans enjoyed the atmosphere and I’m happy to be part of it.

How would you rate the development of Amputee Football in your home state,  Akwa Ibom?

There is nothing like amputee football in the entire state. As we speak, I am the only person involved in the game in the entire Akwa Ibom State. I have tried all I could to make those in government see reason why they should encourage disabled people to embrace the game but all my efforts met brick wall. Way back in 1995, I had a discussion with then Akwa Ibom State Director of Sports Mr. Essien on my plans to establish an amputee football academy in the state and he told me to submit  a proposal, which I did but nothing came out of it. But I’m not relenting in my efforts to set up the academy which I believe will surely see the light of the day very soon.

Looking at amputee football in the country, how would you like it to be re- positioned?

There is need for those in charge of the game to look inwards and put modalities on ground towards ensuring that the game is introduced in all the states of the Federation so that people will not see it as a Lagos affair or the affair of some few states. Membership of the board should also be increased to include representatives from all the states of the Federation, including the Federal Capital Territory because this is the only way government will start paying attention to the sport.

I say this because when a state government discovers that one of its own is involved in the running of the game, it becomes easy to convince them to invest in the sport but if they believe that the interest of their state is not represented, they will feel reluctant to put in money which they will believe is going to other people.

Also there is the need for corporate organizations to help in the development of the game because government cannot do it alone and when this is done, a lot of youths will abandon begging and embrace the game.

Reflecting back, can you tell us how you lost one of your legs?

It’s a long story and I don’t want to remember it. I always feel so sad about the circumstances that led to my leg being amputated but I thank God for what I’ve been able to achieve with one leg.God has given me life, hope and strength. Although I have one leg but I’m not disabled in the brain. I went to school and there is nothing an able bodied person will do that I cannot do because there is ability in disability.

What are some of the challenges you face as an amputee football player and do you have any regret playing the game?

The challenges are numerous but mainly financial problems. It’s not easy travelling from Akwa Ibom to Lagos to participate in championships. It’s equally not easy playing football with one leg on clutches but I’m not regretting anything because of the love and passion I have for the game.

Having said this, I want to say that I don’t have any regret playing the game and if I have my way, I will continue to play it until my legs can no longer carry me.