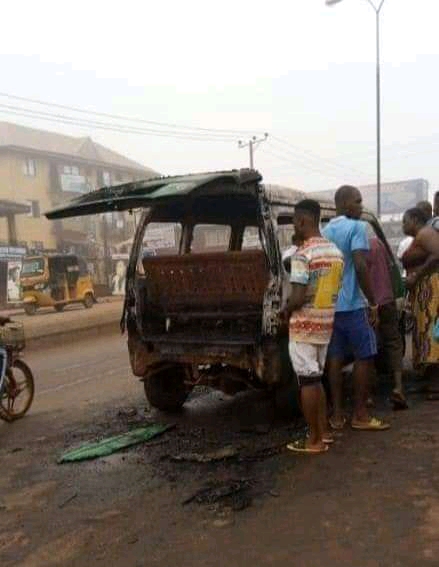 Some gunmen, on Monday, set ablaze a commercial bus, painted green and white, at University Road, Nsukka, in Enugu State.

The incident which reportedly occurred at about 7:30a.m caused fear and panic amongst residents in the community.

The driver was reported to escape unhurt.

“Some young men in a car pursued the bus here. The driver of the bus, noticing that they would catch him, parked in the middle of the road, and ran away.

“His pursuers got there and set the bus ablaze. After that, they drove off. They didn’t burn any other vehicle or destroy any property,” an eyewitness said.

The burnt vehicle has now been evacuated.

Meanwhile Enugu residents have continued to obey the banned sit-at-home order for fear of unknown gunmen.

Despite the resolution of southeast leaders to end the sit-at-home over the detention of leader of the proscribed Indigenous Peoples of Biafra (IPOB), Mazi Nnamdi Kanu, commercial and even academic activities were grounded in most parts of Enugu State.

Fact-Check: Will WhatsApp users pay to use the platform?