FRANK TALK: OF KIDNAPPERS AND THEIR TRIBESMEN (2)

A few years ago, the ‘maiguard’ engaged in the country home of one of my kinsmen knocked up one of my cousins and vanished into thin air.

Today, although I have no intention of ever giving up the product 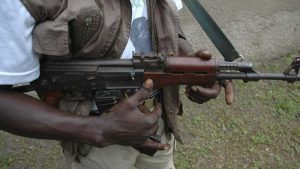 of that liaison, the common knowledge in my village, beginning with the very teenage mother, is that the runaway father is a Hausa man. Nobody seems to understand my explanation that the part of Taraba where the hit-and-run father came from clearly makes him a Jukun.

Case 2: A family member in Lagos recently told me she just engaged a new house help who, she said, was Hausa. When I had the opportunity to chat with the new maid, I discovered that, although she spoke fluent Hausa, she was actually Angas. Of course, my well-educated relation and her entire family have never heard of any such ethnic group. And they wouldn’t really be bothered.

Case 3: Growing up in rural Kwara State, I learnt to accept that there was no amount of explaining to make most of our Yoruba and Nupe neighbours understand that Igbos were not the same as Ijaw, Kalabari, Effik, Ibibio and even Auchi people. To them, we were the same Omo yibo (aje okuta ma mu omi [people who eat stones without drinking water to push it down]).

Those of them who attempted to make any differentiation simply added ‘Isobo’ to the mix – to accommodate the tribes of the old Bendel states).

It was the same story in the far North, where every other southerner, who was not Yoruba, was simply ‘Yanmiri’ (Igbo). Of course, we, most often, mean no harm by these sometimes-derogatory groupings. It’s just the way we’re wired.

That is why I feel we’re taking this matter of alleged profiling of Fulanis and herdsmen as kidnappers and criminals.

The truth is, while it might be easy for the typical northerner to differentiate between the Hausa and the Fulani, and possibly, between the Fulani and the Buzu, or the Tuareg, or the Berber etc, for most of us in the south, these people are all the same: Fulani.

Unfortunately, our inexplicable resolve to leave our borders open to these other aliens (from Chad, Mali, Burkina Faso, Senegal,  Gambia,  Niger Republic, Cameroon), and to stubbornly push the narrative that Nigeria is home to all of them, technically means we have taken in a lot of chaff along with our wheat.

And as these aliens fan out to the nooks and crannies of Nigeria, visiting terror on all parts of the country, the joke (or is it smear?) is on our otherwise peace-loving Bororo, and the entire Fulani.

Yes the more northerly Nigerians, who obviously know better, might describe the felons by what they really are; bandits, but those other Nigerians further south see only Fulani. And it is not because they hate the Fulani, or necessarily want to give a dog a bad name in other to hang it.

This is what is responsible for the seeming profiling of the entire Fulani in the country today, which, understandably, every right-thinking Nigerian Fulani is worried about.

Incidentally, it is actually those who are most guilty of this politicization that are quickest to accuse the rest of us of politicising crime and criminals.

But, nobody was originally profiling anybody as kidnappers, as, before now, many people had been apprehended and for kidnapping and banditry. The problem, however, was that while some faced the full weight of the law, some others got away with a slap on the wrist, or were ordered to be released outright, without as much as an arraignment. Order from above!

When this trend persists, people are wont to ask questions, dig deeper and float all manner of conspiracy theories. This is more so when it turns out that many of those who usually got away with their crimes were from a particular ethnic stock. To begin with, only a Fulani can really rustle cattle. It’s a skill that is not easily found among other tribes. So, if those troubling the North-west and North-central are Fulani, as confirmed by Sheikh Gumi’s recent peace-building efforts, why are we reluctant to call a spade by its name?

Secondly, Most of the communities in the South-west, Edo, Delta, Enugu, Benue, Kaduna, Taraba etc. now seemingly threatening the Fulani, and wrongly taking the law into their own hands, all have cases of felons they arrested and handed over to the police and other security agencies, but who got released almost immediately – without trial.

In a country where police regularly storm people’s homes and parade the residents with locally fabricated guns, machetes etc. seized from then, is it curious that the same police look away when they see herders moving freely with AK-47 and other assault rifles as well as sundry dangerous weapons?

Luckily, the Kaduna State governor, who once took a truckload of cash to bandits, allegedly to beg them to stop attacking people, is now singing a new song. Same too is the Northern governors forum.

The problem has always been us the political elite (both in and outside of government), who politicize the criminality, appropriate the criminals and shield them with impunity. It is both with those who give state cover to criminals and those who raise false alarm over such governmental duplicity where there really is none. Those of us who either read political meanings into honest government mistakes, or deliberately misinterpret sincere policies and programmes.

In all, if we treat every criminal as criminal – and equally before the law, all the criminals will suddenly lose their ethnicity and become of one tribe: the tribe of felons.