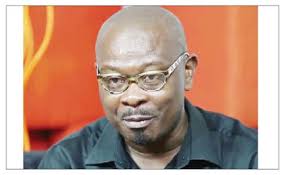 Rights activist, Mr. Okechukwu Nwanguma, has lambasted the President Muhammadu Buhari-led administration on the way it handled the #EndSARS protests, which was later hijacked by hoodlums.

According to Nwanguma, who is also the Executive Director of the Rule of Law and Accountability Advocacy Centre (RULAAC), those behind the attacks of peaceful EndSARS protesters must be made to face the International Criminal Court for the crime against humanity.

Also, Nwanguma in this interview exposed salient lessons every Nigerian must learn from the gale of #EndSARS protests that rocked the nation for over two weeks.

What do you make of the 20th October 2020 bloodbath that occurred in the various parts of Lagos?

That tragic incident of shooting live bullets into a peaceful crowd of protesters at Lekki Toll Gate, Lagos by military personnel is the signature of the ruthless and repressive Muhammadu Buhari regime. It was an unwarranted, unjustifiable and condemnable crime against humanity for which Buhari must face trial at the International Criminal Court.

The protesters did nothing to deserve such barbaric treatment. They were only exercising their constitutional right to freely express their views. They were peacefully demanding good governance. But the Buhari regime proved its incompetence and its anti-people disposition by responding with violence.

Only an insensitive and authoritarian dictator will respond to a peaceful protest by sending the military to open fire on a crowd of people who posed no threat to them or others. Here is a cowardly military that has been negotiating with Boko Haram in the North but feels free to open fire on people armed only with their national flag and chanting their country’s national anthem, killing and injuring many of them

Remember that these protesters had been on the same spot for close to two weeks, peacefully demanding an end to police brutality and the governance failures that fuel police brutality. There was no reason for them to suddenly go violent.

They continually reaffirmed their commitment to remaining peaceful, to the disappointment of a sinister government. Then the desperate government in a grand diabolical machination to sabotage the protesters, hired thugs to infiltrate them, hijack and derail the cause to portray the protesters as having turned violent and then use that pretext to crack down on them.

We heard reports and saw videos of protesters being attacked by government-sponsored hoodlums in many states including Lagos and Abuja. When that tactic did not achieve the intended result of discrediting the protesters and forcing them out of the streets, the government then resorted to the brazen tactic of terror. They dispatched the compromised military to kill its citizens. This is a big shame. Buhari and his cohorts must be brought to book.

Some Nigerians argue that the #EndSARS protesters pushed the government to the wall with their seemingly unending demands and protests, that caused huge losses to both governments and individuals. How do you respond to such notions?

The Buhari government is known for its characteristic intolerance for freedom of expression, dissent and criticisms. It is a brutal regime that brooks no opposition.

You know how many citizens have been harassed, arrested, indefinitely detained and even abducted and disappeared for criticizing state governors, some officials and the head of this regime? The right to criticise or protest is a fundamental right guaranteed by the Constitution of the Federal Republic of Nigeria as well as international human rights instruments that Nigeria is a signatory to.

A responsible and responsive government must listen to and dialogue with the people when they make demands legitimately and peacefully, as the protesters were doing. They were never violent. The government responded with unprovoked and cowardly violence.

Yes, the protesters refused to call off their protest even after the government made promises and insisted on seeing concrete action before they would believe the government.

That was not a justification to fire live bullets at them. Government’s insincerity, betrayal and failure to fulfil its past promises led to public cynicism and distrust of government. So, the citizens felt they would not be fooled again by an untrustworthy regime.

All that government needed to do under the circumstance was simply to engage the protesters and initiate measures to rebuild confidence and trust, not to resort to the dumb tactic of suppressing the exercise of democratic freedom.

It is a big shame that it took days after that tragic incident that elicited global outrage before the President reluctantly addressed the country. It turned out to be an empty speech devoid of empathy. No mention of the Lekki incident. So perfunctory. ‘We will not allow a breakdown of law and order’, as if it wasn’t his government’s negligence that led to breaking down of law and order. It was so disappointing, and predictably so.

During the Black Lives Matter protests that swept through the States of America, following the killing of George Floyd, President Trump was constantly in touch with and addressing Americans.

Never mind if he wasn’t saying the right things. But at least he demonstrated the responsibility that is expected of an elected President. But we have a President who continues to lend credence to the insinuation that he is dead. It is either that he is truly dead or he is insensitive.

There have been accusations and counter-accusations over who was behind 20-10-2020 killings. How optimistic are you that the government’s investigation panel can unravel the masterminds behind the shooting?

But the Lagos State governor clearly said he knew nothing about the deployment of the military personnel who went to the venue of the rally and opened fire on unarmed protesters in violation of national law and international standards.

The Lagos State governor has ordered an investigation and we are waiting to see the outcome. This matter is too serious to be swept under the carpet. The international community must take Buhari to task on this national shame.

What do you suggest must be done to douse tension and assuage those that have been hurt by this incident?

It is not out of place to suspect that the President, by his unfathomable and undignifying silence, is complicit in the whole shameful saga. But there must be an investigation to ascertain who ordered that deadly military assault on civilian protesters.

I know that steps are being taken by various groups to file complaints against Buhari and his cohorts at the International Criminal Court for this crime. Buhari and whoever else may be involved must be brought to book, if not now, certainly later.

Going forward, what lessons do you think Nigeria should learn from this whole incident?

The greatest lesson from this whole episode is that the voice of the youth is very critical in the struggle to consolidate democracy and promote national development. Our youths had hitherto been docile and passive. But I’m happy about the sudden re-awakening of consciousness, which is reassuring.

Our youths seem to have found their voices again and they spoke loud and clear. We must sustain this momentum. Our youths constitute a critical mass and they must use their numbers, spirit and energy to reclaim this country from the unpatriotic, visionless, opportunistic and self-seeking old and bankrupt politicians that kidnapped and have held our country down for many years. This revolution must be accomplished.

So how do we enthrone a better Nigeria Police Force (NPF)?

The widespread call for #endsarsnow #endsars is a reflection of popular disenchantment and frustration with the unabated atrocities of that rogue unit of the NPF. I have also heard people call for the disbandment of the NPF.

The context is understandable. But my view is that ending SARS on itself begs the question. If you end SARS, what replaces it? The same rogue elements within SARS remain in the NPF. There certainly are elements within the NPF that are unfit and lack the basic qualification to have been recruited in the first place. Such officers must be weeded out. The Police Service Commission (PSC) must be awake to its responsibilities.

The name -‘SARS’, has become a symbol and metaphor for impunity and abuse. And it is good that it has been done away with the horrific name. That name evokes horror, public nuisance and resentment.

What is called for ultimately is intensified efforts to fundamentally transform the Nigeria Police Force.

The new Police Act provides an opportunity to push the struggle forward. The government needs to engage the various stakeholders who have various roles under the law to ensure they play their roles.

In the immediate, we (civil society, PSC, and NHRC- National Human Rights Commission) must work together to develop new Standard Operating Procedures- drawing from the Police Act, Administration of Criminal Justice Act (ACJA) and the Anti Torture Act-  that will guide police conduct and performance and based on which we can hold the police accountable.