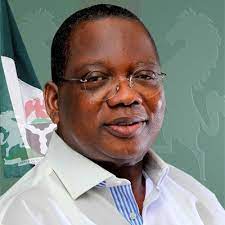 Hon. Ganiyu Johnson, an ally of the National Leader of the All Progressives Congress (APC), has been endorsed for a seat in the House of Representatives on the platform of the APC by a political pressure group working for the presidential ambition of the Vice President, Prof. Yemi Osinbajo (PYO).

The political pressure class, “Itesiwaju Group,” which is loyal to former Home Affairs Commissioner and Lagos State and leader of PYO Organisation, Dr. Abdulhakeem Abdulateef, has endorsed Johnson on Saturday for the House of Representatives for Oshodi-Isolo II Federal Constituency.

Ganiyu, who contested on the platform of the APC won in 2019, after defeating Emmanuel Ugochukwu Nnodim of the Peoples Democratic Party (PDP).

READ ALSO: http://How Obasanjo secured release of over 4,000 Prisoners of War in Tigray

A leading contender against Johnson is the former Chief Press Secretary (CPS) to Governor Bola Tinubu, and later Commissioner for Information and Strategy, under the administration of Governor Akinwunmi Ambode, Hon. Kehinde Bamigbetan.

The relationship between Johnson and the PYO has been the subject of speculations until the recent endorsement by the group.

Recall Vice President Yemi Osinbajo is contesting for the Presidential ticket of the APC along with the National Leader of the party and former Governor of Lagos State, Bola Ahmed Tinubu.

It was learnt that Johnson, who sponsored the distribution of bags of rice to attract new members to the Itesiwaju Group last week, has promised the group more support in its efforts at mobilising Lagos State APC  delegates to boost the fortunes of the PYO campaign organisation  in the May 30 presidential primaries of the party.

Last month, Dr. Abdul-Lateef made public his support for Osinbajo when he led a group of Islamic leaders in a solidarity visit to the Presidential aspirant and since then, there have been moves to recruit statutory delegates from Lagos State to give Osinbajo good electoral performance at the primaries.

A statement by the state leader of the group, Femi Ibine, and circulated on Itesiwaju Ipinle Eko Foundation platform, and made available to The Nigerian Xpress, read in part: “Distinguished and esteemed members, warmest greetings from our foremost and iconic leader, Dr. AbdulHakeem Abdul-Lateef and the ever loyal members of the Central Working Committee (CWC).

“A week ago, we made a statement that Itesiwaju is planted on a solid rock, the feet are firmly rooted and the leaves are ever green. It was a signal that come rain, come shine Itesiwaju is a contending force of reckon. “Eni ti o riwa, ko ri nkankan.”

“As we embark on a new phase of political landscape, the leadership of Itesiwaju has weighed the past, present and thoroughly analysed the future of political prospects in our constituency with the best interest of the people at heart and therefore taken a working decision on our MHR (Member of House of Representatives).

“While wishing the aspirants a resounding victory in their quest to clinch the ticket of the party, we want our teeming members to receive and act in accordance with this directive from the apex leadership of Itesiwaju Ipinle Eko Foundation and spread the news to others that our endorsed aspirant for the APC party primaries for the House of Representatives come Thursday May 26, 2022 is Hon. Ganiu Abiodun Johnson.

“We urge all eligible delegates to go out and vote for him en masse,” the statement concluded.