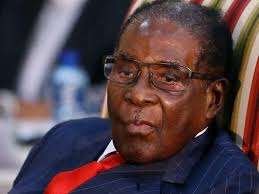 Zimbabweans are awaiting former President Robert Mugabe’s body, which was due to arrive at the Robert Gabriel Mugabe International Airport on Wednesday.

After Mugabe’s death, a delegation led by Vice President Kembo Mohadi left Harare on Monday to join his family in Singapore and help with the repatriation of his body.

The government is arranging a huge send-off for the former president and has announced that burial will take place on Sunday.

However, Mugabe’s family has not yet confirmed where and when Zimbabwe’s founding leader will be buried.

Indication shows that some members want to respect his wishes that he should be buried next to his mother at his rural home in Zvimba, about 100 kilometres from Harare in Mashonaland West Province.

The government is pushing for Mugabe, who resigned in 2017 after 37 years in power, to be buried at the national shrine.

The shrine is a National Heroes Acre in Harare, where Zimbaweans honour the country’s illustrious sons and daughters when they pass on.

According to parts of the programme of events, his body will on arrival be taken to an army barracks, 1 Commando, before it is taken to his home in northern Harare.

Zimbabweans will view the body at Rufaro Stadium, also in Harare, before the body is taken to Zvimba.

Details of place and date of burial have not been released, with Mugabe’s nephew and family spokesperson Leo Mugabe saying that traditional leaders in his home area had not yet announced them. (NAN)