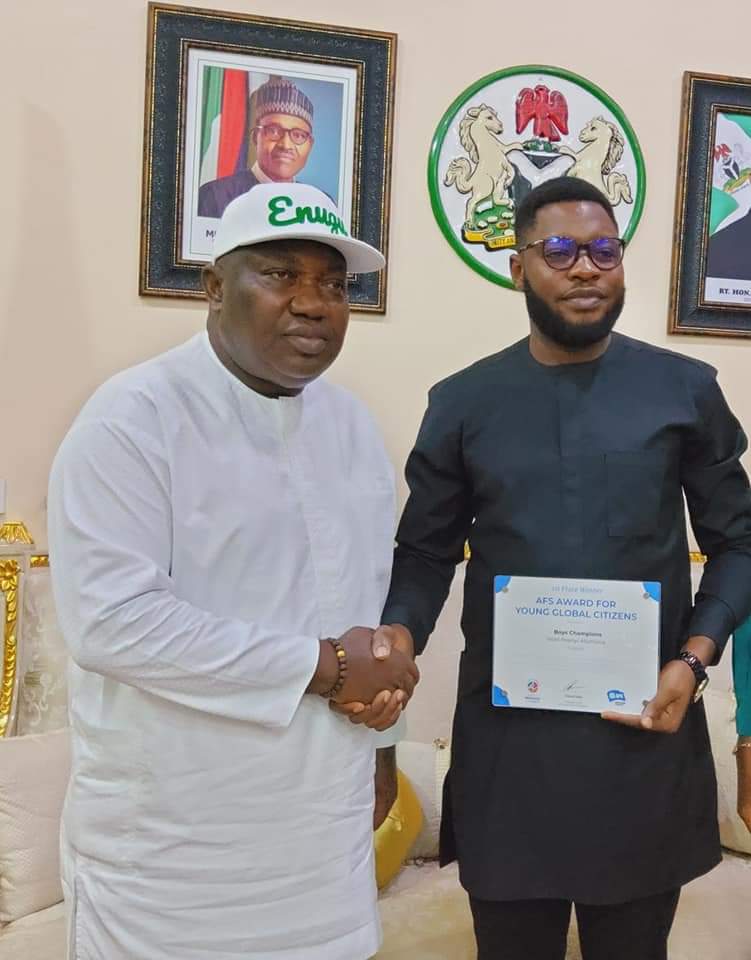 Governor Ifeanyi Ugwuanyi of Enugu State has congratulated the winner of the AFS award, Noel Alumona, describing the global award as an honour to the state.

The governor lauded Alumona for bringing the award home and making the state and the entire country proud.

Governor Ugwuanyi stated this at the Government House, on Monday, when Alumona, who is also the founder of a non-governmental organisation, Boys Champions, paid him a courtesy visit to inform him of the forthcoming International Conference organised by NGO.

The conference is slated for November 25 at the Base Landmarks Event Center, Independent Layout, Enugu.

The governor commended the founder of Boys Champions and expressed keen interest in the good works of the organisation.

He expressed delight with the positive impact and peace building initiatives of the organisation among youths.

He extolled  Alumona for using the platform to sensitise young men to be peace ambassadors and shun violence, especially against women and girls in the society.

“We are very proud of you for this recognition you’ve brought to our dear state, country and continent. I am impressed by your upcoming event, Shaping the Future Conference, which you brought home to the state as a true son of Enugu State. I will support you to continue your good works of changing lives and creating peace. Keep it up,”  Ugwuanyi said.

In his response, Alumona thanked the Governor for  his hearty congratulations when the award was first announced. He further expressed appreciation for his promises to support the programmes of Boys Champions to propagate positive values among youths in order to curtail the prevalence of gender based violence in local communities across the country.

Alumona, a student at Vanderbilt University in the United States, won the 2022 AFS Award for Young Global Citizens, and became the first African to win the coveted prize.

The award came as a  recognition of his vigorous campaign to end violence against women and girls through proper orientation of boys on responsible behaviour and gender tolerance.