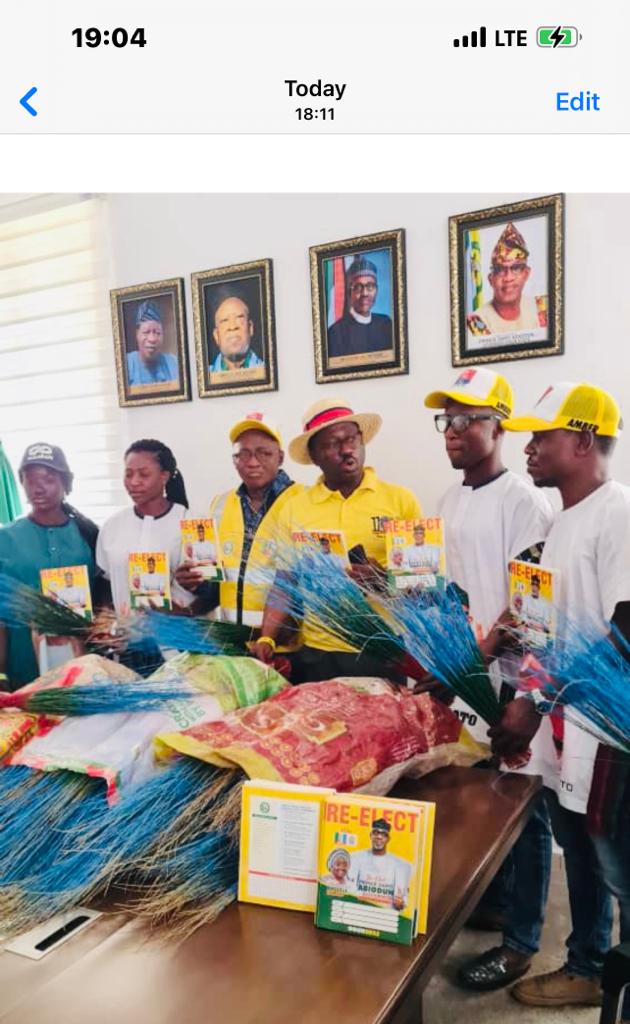 A youth-based organisation within the All Progressives Congress (APC), ‘Work For APC Candidates’ in Ijebu East Local Government Area of Ogun State, has donated hundreds of APC-coloured brooms and exercise books, to boost the ongoing campaign of the Party.

This was coming on the heels of an earlier donation during Governor Dapo Abiodun’s campaign tour of Ijebu East Local Government.

Presenting the gifts, on Saturday afternoon, at the APC Campaign Secretariat, in Abeokuta, the group members said the gesture was based on the achievements of Governor Abiodun and the need to support him for second term to continue the good works he has started.

The presentation by the group, led by its Coordinator, Hon Akindele Fasheyi, who is also the Leader of Ijebu East LG Legislative Council, was the second gesture of support from the youth group within a week.

According to Fasheyi, “the broom is the logo of our party, there is therefore the need to further popularise the logo that will be on the ballots on election days.

The donations were received on behalf of the Campaign Council by the Assistant Director of the Administration, Mr. Ayotunde Okunowo, supported by Ogun.

Speaking on behalf of the governor, Okunowo thanked the group for their kind gesture and promised to deliver the items to the Governor, who is the Chairman of the Campaign Council.

Recall the same group made donations of 2000 copies of 40 leaves Exercise Books to Governor Abiodun last Thursday during the commissioning of Esure Road in Ijebu East Local Government Area of the state.