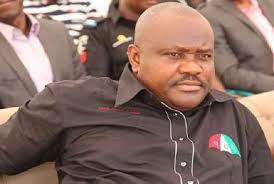 A Port Harcourt-based youth group, Rivers Renaissance says Governor Nyesom Wike is still indebted to Rt. Hon. Rotimi Amaechi for his achievements in politics. Rivers Renaissance while responding to claims by Governor Wike that Amaechi frustrated his ministerial nomination under President Goodluck Jonathan said there was no iota of veracity in the Governor’s claim.

The group in a statement issued in Port Harcourt on Sunday and signed by its President General, Dr. Dokubo Dan-Tamuno, said rather than struggle to demonise the Minister for Transportation at the slightest opportunity, Governor Wike should be eternally grateful to Amaechi for his political achievements.

Wike while addressing the first convocation of Pamo medical University on Saturday re-echoed that Amaechi frustrated his nomination as Minister under President Jonathan.

The group frowned at the governor’s claim, dismissing it as blatant falsehood without merit.

“Amaechi supported your second term bid as chairman of Obio-Akpor Local Government Council even in the face of opposition from the Obio-Akpor people. He supported your emergence as Deputy and later President of ALGON ; made you his Chief of Staff (CoS) in defiance to your preference for Commissioner for Finance. He also nominated you for appointment as Minister. Even when Security agencies wrote negative report about you on grounds of financial malfeasance and patronage of cult groups among other sundry issues, he took it personal and ensured you were cleared . How do you speak ill of such a man with so much ingratitude?

“Your success story and climb on life’s perilous ladder can never be complete without Amaechi and if he (Amaechi) wanted to replace your nomination he could have easily done it especially with the initial reluctance by former President Jonathan in accepting your nomination.

The President-General of Rivers Renaissance described Governor Wike as a ‘man without character’ and rather than use the opportunity of the event to market his government policy thrust and direction for the education sector in the State, he preferred to chase vainglory – a character trait that underlines everything he does.

“It’s a shame that Wike has gone hysterical over Amaechi and it is unfortunate his abhorrence and obsession to tar his former boss (Amaechi) with the worst possible brush will destroy him beyond redemption. Rather than use the convocation to tell the world about sustainable development initiatives for the education sector in the State (if there was any), he ended up de-marketing his own government. What a wasted opportunity,” Dr. Dan-Tamuno declared.

The group commended Amaechi for promoting inclusiveness and harnessing the diversity of Rivers people in the interest of the State, calling on the Minister to ignore Governor Wike and his rabble rousing.