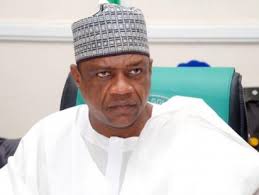 Yobe State governor Alhaji Ibrahim Gaidam could not travel to Bukarti, his country home, in Yunusari Local Government Area of the state to vote, due to an early morning attack on Geidam by Boko Haram insurgents.

Abdullahi Bego, Director General, Media affairs to the governor, confirmed the development in a statement released to the News Agency of Nigeria (NAN) on Saturday in Damaturu.

Bego, saying that the situation was under control and voting was going on, stated that the governor could not partake in the exercise.

“The security agencies would naturally seek to reinforce and increase security around the governor for him to travel to cast his vote.

“The increased security around the governor will mean that vital security resources that are needed elsewhere in the state would have to be diverted and allocated to the governor,” the governor’s spokesperson said.

NAN reports that the governor, in consultation with security agencies decided that it was more prudent to make the sacrifice.

“It is better and more useful for the security agents, including soldiers, police, civil defence, DSS, to focus their attention on providing security for the election than devoting large security contingent for the governor to cast his vote,” Bego said.

Gaidam, who is also a senatorial candidate in the Presidential and National Assembly election, commended security agencies for their effort to ensure a peaceful and successful election across the State.

He made the observation after casting his vote on Saturday in Damaturu, saying the timely commencement of the elections, adequate provision of election materials and security to the electorate made the election successful.

“The massive turn out of voters was encouraged by the security apparatus put in place and the commitment to the preparations made by INEC.

“The turnout is very impressive and the momentum should be maintained,” he said. (NAN)