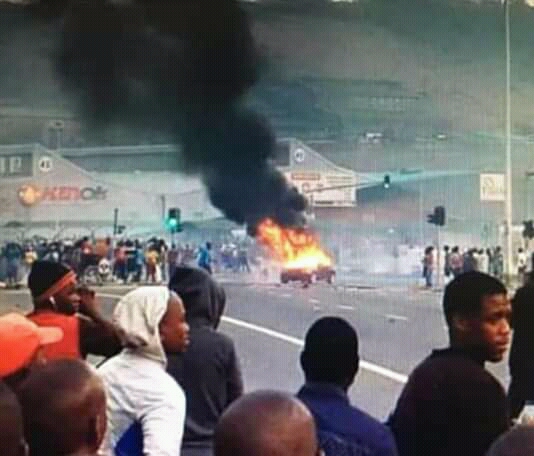 The Nigerian Union in South Africa (NUSA) has expressed displeasure with the alleged violent attack of Nigerians in the latest wave of xenophobic attacks on foreigners in that country.

The Acting Secretary of NUSA, Collins Mgbo, gave the condemnation in a letter addressed to the South African authorities, a copy of which made available to the News Agency of Nigeria (NAN) in Port Harcourt on Wednesday.

He said the xenophobic attacks on foreigners started on March 24 in Brits, North West Province and Durban, Kwazulu-Natal province.

“NUSA is using this medium to bring to your attention of attacks on our nationals in Brits, North West Province which started on Sunday, March 24 2019.

“Our people are living in panic and fear of more attacks by a coalition of gang members called Russians and Taxi Drivers.

“Information available to our disposal revealed that shops and properties of Nigerians were damaged and burnt during the attacks,” he said.

Mgbo said that seven Nigerians were injured in the on going attacks with three of them hospitalised having sustained life threatening injuries.

He said that intervention from governments of South Africa and Nigeria was urgently needed, especially as the situation could easily escalate further.

“Also, earlier in the day, foreign nationals in Durban area of Kwazulu-Natal Province were attacked, beaten and their properties burnt by angry locals.

“Over 100 foreigners have taken refuge at the police station. Some of the displaced foreigners are Nigerians.

“As at the time of this report, no death of any Nigerian has been recorded; even though two foreign nationals have been reported dead,” Mgbo said in the letter.

Mgbo said that a high level delegation led by NUSA would soon engage stakeholders as well as groups that allegedly carried out the assault with the aim of finding a lasting solution. (NAN)