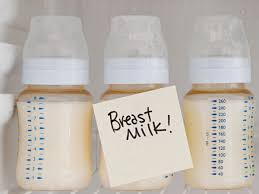 Dr Chioma Uchendu, a consultant ophthalmologist at the Federal Medical Centre (FMC), Umuahia, has warned against the use of breast milk and urine to treat eye infections.
Uchendu issued the warning in an interview with the News Agency of Nigeria (NAN) in Umuahia on Thursday, while speaking on the World Sight Day celebration.
She described the use of such traditional medications as harmful to the eye and capable of causing blindness.
She said: “Some women still put breast milk in their babies’ eyes. They argue that breast milk has anti-bodies.
“Yes, it has. But what about the glucose, lactose or milk components of the breast milk?
“These are things that can even become what we call culture media.
“If there is already an organism (an infection in the eye) and you put sugar and all those things, the organism will just relax well and start to grow.”

READ ALSO:Prostate Cancer: Being over 40 years, a risk factor — Expert
For those who use urine, Uchendu warned that such urine could contain bacteria called Neisesseria gonorrhoea, which could cause blindness too.
“Most people are carriers of this organism and when it gets into the cornea it starts destroying it and the person comes out with blindness,” she said.
Uchendu said the essence of this year’s World Sight Day, with the theme, “Sight First”, was to create awareness on why people should keep their sight.
She raised concerns about the growing eye problems globally, saying that about 80 per cent of blindness could either be avoidable or treatable.
According to her, the world most common cause of blindness is cataract (clouding of the lens), which is normally an aging process but could be cured by a cataract extraction surgery.
The ophthalmologist, who said that cataract is followed closely by other defects like refractive error and glaucoma, called for regular eye check.
NAN reports that the World Health Organisation disclosed in its latest report that “at least 2.2 billion people in the world have a vision impairment or blindness.
“At least one billion have a vision impairment that could have been prevented or has yet to be addressed,” it states. (NAN)

Traffic: Google calls for more use of its map features

Lady escapes lynching over alleged snatching of manhood in BRT