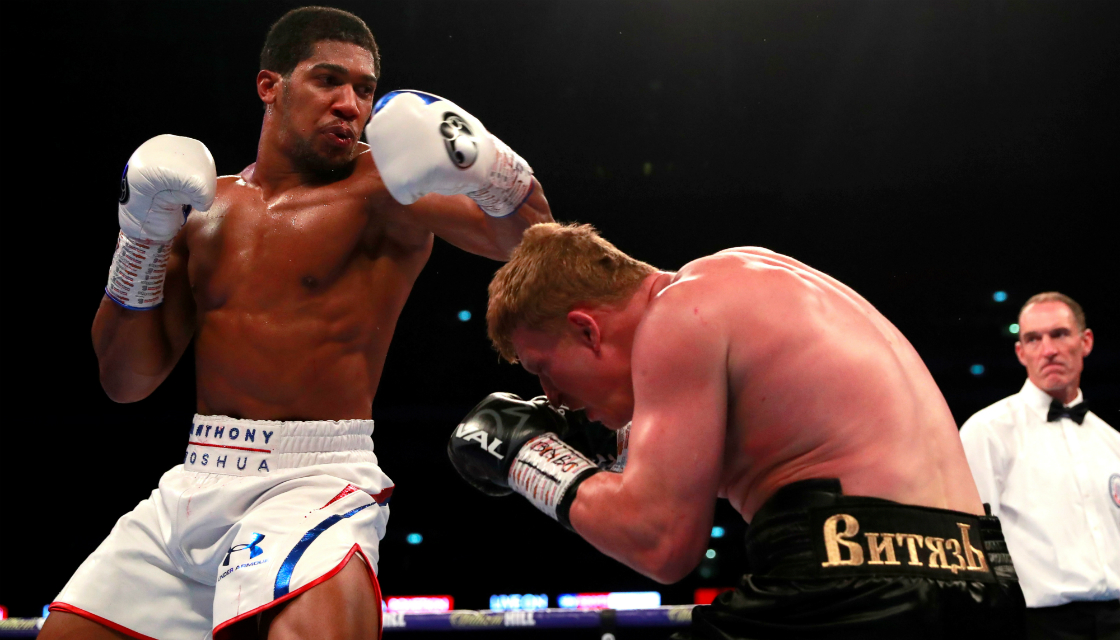 A previously close contest turned in Joshua’s favour decisively when he sent the Russian crashing to the canvas with a straight right hand and left hook.

Povetkin gamely beat the count but Joshua piled in before referee Steve Gray stopped the contest at one minute and 59 seconds of the seventh round.

Victory saw Joshua extend his unbeaten professional record to 22 wins from 22 fights, with 21 knockouts, in front of a raucous home crowd.

“Povetkin is a very tough challenger and he proved it tonight,” Joshua told Sky Sports.

“I realised he was strong to the head but weak to the body.

“I got my knockout streak back, I found my right hand again.”

This fight was the latest in a line of professional heavyweight title bouts, featuring the likes of Muhammad Ali, Joe Frazier and George Foreman, between two former Olympic champions, with Joshua having won gold in front of his home crowd at the 2012 London Games — eight years after Povetkin stood atop the podium in Athens.

Joshua, 28, had a significant height and reach advantage of several inches over Povetkin.

This fight saw Joshua returning to the scene of arguably his greatest triumph, an 11th-round stoppage of former champion Wladimir Klitschko last year.

Klitschko was the only man to have previously inflicted a blemish on Povetkin’s now 36-fight record, with a points win back in 2013.

Joshua, born in nearby Watford but based in London, had been taken the distance for the first time as a professional in his last title defence — a unanimous points victory over New Zealand’s Joseph Parker in Cardiff in March.

The undercard of that fight saw Povetkin serve notice of his formidable punching power with a sickening knockout of Britain’s David Price.

Povetkin, who in 2016 was given an indefinite ban from boxing after testing positive for the banned substance meldonium that was later cut to a year, had insisted in the build-up he was a far stronger fighter than the one beaten by Klitschko.

And the first round ended with Povetkin, stooping low, rocking Joshua with a right uppercut that drew blood from the champion’s nose.

Joshua, who said Thursday that “my well is deep, my heart can definitely go through hell and back”, was certainly being tested in the opening exchanges, although he did start to respond with some single-punch jabs.

And come the fourth round, Povetkin had a significant cut above the left eye.

Nevertheless, at the end of the sixth he was still in the contest only for Joshua to seal victory barely two minutes later.

But whether this win takes Joshua any closer to a fight with World Boxing Council heavyweight title-holder Deontay Wilder, who next fights Britain’s former world champion Tyson Fury on December 1, remains to be seen.

“My number one would be Wilder,” said Joshua, whose promoter Eddie Hearn has already booked Wembley for April 13, when asked about his next opponent.

“May the champion bring himself here and have a good old fashioned dust-up.

“All I want to fight is serious challengers. If Dillian (Whyte) wants to fight here he is also more than welcome.”

Whyte, who was among an estimated 80,000 crowd at Wembley, said of Joshua’s latest victory: “He was patient and took his time, he was jabbing to the body and then brought the right into play which caught Povetkin by surprise.

“Hopefully, it’s me next, I’m here and ready to fight.”