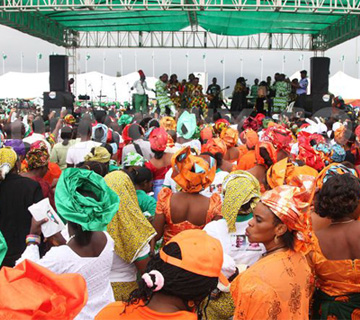 Women in Rivers West Senatorial District have been charged to show more interest in politics.

They were told that lack of interest in governance among women have created the opportunity for continued domination of the governance space by men at all levels of governance, this it was noted has largely led to the under representation of women and their interests in politics.

The charge was given recently during a town hall meeting on women involvement in governance organised by Centre for Environment, Human rights and development (CEHRD), with support from the Netherlands Embassy in Nigeria, at Ulakwo community in Etche Local Government Area of Rivers State.

One of the facilitators of the meeting organised for women across different communities in the senatorial district, Queen Agba noted that CEHRD is worried over the continued domination of the political space by men and the failure of women to unite and challenge the status quo.

She stated that women have what it takes to compete effectively with their male counterpart in politics, but have naively allowed themselves to be marginalised, adding that the beauty of democracy is the equality of right of participation by men and women.

In his contribution, David Vareba, also a facilitator stated that exclusion of women from governance is no longer acceptable or fashionable.

He urged women to boldly step out and join politics, adding that women in particular and citizens in general should begin to ask questions on how they are being governed.

He also advised that even at the community level, women should begin to demand opportunities to be part of community decision making bodies.

He commended the participants for their robust contributions during the meeting, said, it is encouraging when women gather to discuss governance.

At the end of the town hall meeting, a platform known as Women in Governance Network was formed to aid the journey of women to political relevance.

The participants resolved to use the platform as an avenue to mobilize women for active participation in governance.

They thanked CEHRD for bringing them together to discuss how to effectively participate in governance at all levels regularly meet under the WIGN to discuss issues of governance and how to improve women participation.

The meeting was attended by women from different communities in the senatorial district.