Why pig farming is challenging, by farmer 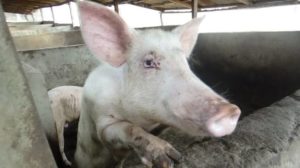 A farmer, Mr Fortune Alabi, has identified feed and access to land as the major challenges facing  an average pig farmer in Nigeria.

Alabi, an expert in pig rearing, made the observation in an interview with the News Agency of Nigeria (NAN) on Monday in Lagos.

He said that there were gains  in pig farming but noted that first timers and experienced pig farmers would have to overcome the hurdles of land acquisition and high cost of feed before reaping the gains.

“For those starting a pig farm, the major challenge will be sourcing land; a proper site for the pig farm is paramount.

“It is not enough to get any land; it is important  to get the one that can accommodate the waste produced by the pigs.

“For those already into full-time pig farming, the major challenge is getting  feed for the animals. At present, procurement of feed accounta for 70 per cent of the pig farmer’s overhead cost.

“The aim of every pig farmer is how to bring down the cost of feeds and get a good return for investment,” he told NAN.

He said that in the case of open grazing for pigs’ feed, the farmer would still spend a lot of money in fencing the land high enough so the animals would not stray.

“The major component of pig feed is waste matter, unfortunately the price of waste has gone up due to increasing demand.

“Pigs consume all kinds of waste, anything humans eat, pigs will eat – brewery, cocoa, vegetable and even restaurant wastes. Once people know the waste is useful to you, they start charging you,” he told NAN.

According to him, high cost of pig feed is due to high demand.

“Water is most necessary in pig farming because the way pigs are made, they are not able to regulate their body temperature without immersing in water from time to time.

“If you are doing open grazing, the pig will look for mud to roll in, so they can cool their body temperature.

“In closed pig farming, you will need a borehole to keep them cool,” Alabi said.

He called on local farmers to consider preferences of communities when rearing pigs.

“The farmer must put the `local’ factor into consideration: How do the natives want their pork – fatty or lean?

“For example, the Americans like their pork with fat and loads of oil that in turn will determine the kind of feed you give to the pigs.

“Other countries may want their pigs lean; to do that, you need to add salt to the feed components.

“In Nigeria, we have particular preferences on how we want our pork,” he said. (NAN)